In today's papers: The country's image keeps getting a pounding in the Indian media as Australians are portrayed as bad losers at cricket, who assault, and even murder, Indians in revenge. 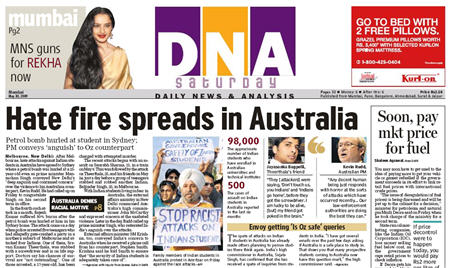 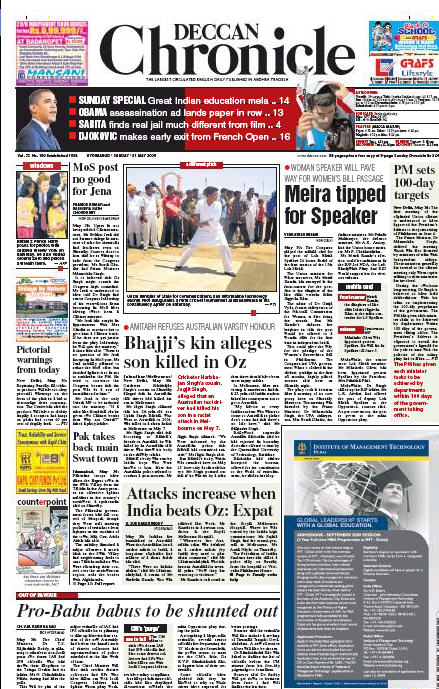 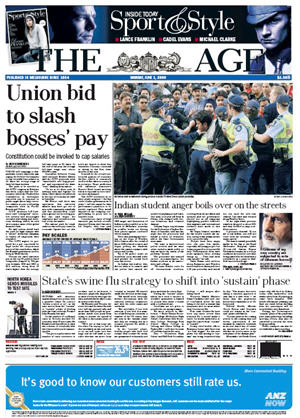 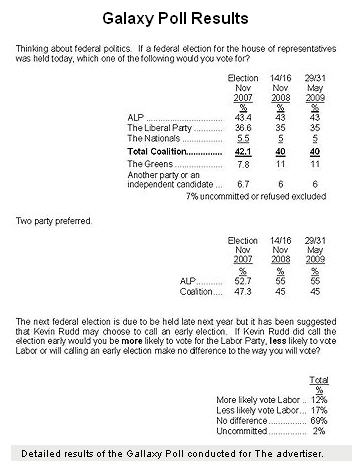 Rate unlikely to fall as recession becomes official – The Australian

Reserve won’t cut despite shrinkage of GDP – The Australian

Australia may take Chinese detainees – a request by the US for Australia to take Chinese Uighurs being held at the Guantanamo Bay prison involves a smaller number of prisoners than in previous requests and is being considered by immigration and security officials, the Foreign Minister, Stephen Smith, ais reported in the Sydney Morning Herald as saying.

Unions press for demands to be met – The Australian

Libs should dust off Ergas’s review – Glenn Milne, The Australian

After the stimulus package, Rudd has no ammo left – writes David Uren in The Australian 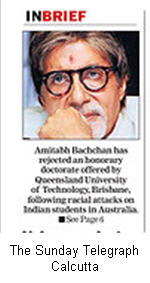 Attacked student sounds Australia warning – The Telegraph, Calcutta reports thatAmitabh Bachchan has decided to turn down an honorary doctorate from a Brisbane university in the wake of attacks on Indian students in Australia, and has asked his fans to tell him if they agreed with his decision. The actor was to receive the honorary doctorate from Queensland University of Technology in July for his contribution to entertainment. A retrospective of his films was also scheduled to be screened in Brisbane on the occasion. 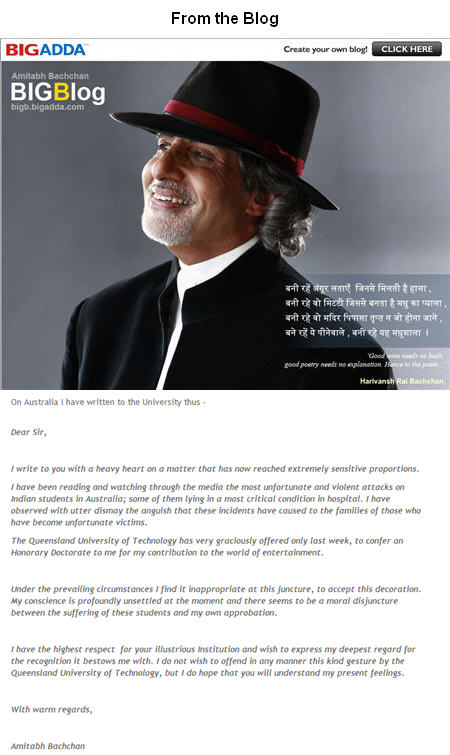 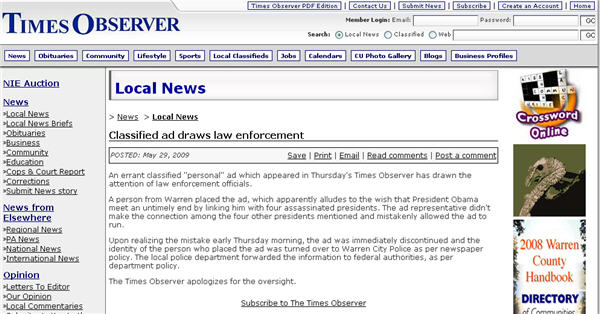 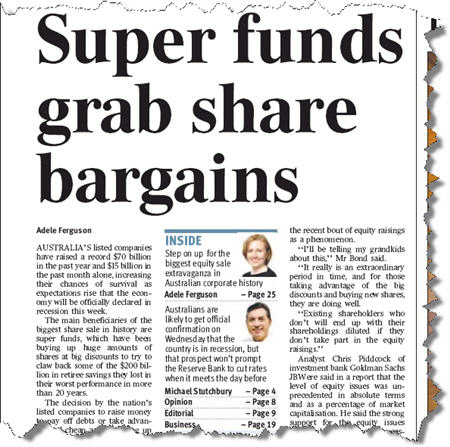 Weird snake pops up after a century – Northern Territory News

Why are they trying to gag a top British science writer? – When chiropractors drag a top science writer into the libel courts, the country has lost its backbone writes Nick Cohen in the Sunday Observer, London.

Power shifts to papers in web war – The Australian

JD Salinger considers legal action to stop The Catcher in the Rye sequel – Agents for Jerome David “JD” Salinger, the famously reclusive and litigious author, are consulting lawyers about the publication in Britain next month of an unauthorised sequel to “The Catcher in the Rye” – London Daily Telegraph

Our bullying shame – Bullying peaks in primary school, in year 5, but continues well into high school, according to Australia’s largest study of the problem – Melbourne Herald Sun

“They are very quiet-natured, passive sort of people … They tend to travel late at night because of work or study and carry valuable items: i-pods, mobile phones, and lap-top computers … making them vulnerable.”

Does anyone else find the above statement offensive? First, surely we should all be safe to travel late at night with or without valuable items. Second, is it not a form of racism to make generalisations based on race: statements such as Germans don’t have a sense of humour, Indians are passive and peaceful, Australians believe in a fair go (clearly not), Americans are insular, etc etc.

It makes it sound as though it’s their fault. Just as many years ago it was often thought to be the woman’s fault if she were raped.

I’m not surprised the Indian media are taking this to heart.

Imagine if 70 Australians had been attacked in India in the past year. The media here would have frothed a lot sooner than the Indian media has. The true number of attacks is far greater than 70 as many go unreported.
The police have a lot to answer for. Shades of British police in the 60s and 70s- an institutionalised culture of denial. Can Overland see this?

Why only students? There are lots of immigrants in this country from the sub-continent and Sri Lanka, I haven’t heard of them being subject to attack, and certainly not here in the NT. Most are very respected members of the community, such as doctors and other professionals.
Possibly it reflects resentment at their perceived taking of Australian places at universities, but it doesn’t appear rational, there are plenty of other asian students in this country.
There are all sorts of nuts, racists etc in every country unfortunately, including India; we haven’t resorted to burning foreign religious and their families alive. If these racists can’t be educated to be more tolerant, severe punishment for those transgressing is the order of the day, as was the fate of van Dongeren and his crew in WA.

I travel on the sydenham line everyday and am surrounded by people whose backgrounds include I imagine all races and we travel together. Every time the bloke at the age wants to push his barrow I travel home in a more nasty environment. Somebody at the age has blown this up to suit their own purposes. Where did the 70 incidents over the last year part come in? And if so that turns out to be one and a third per week. In the western suburbs they are not the worst odds. For the last few days we have heard of two incidents, a house party crashed violently(not something exclusive to indian students) and the boy in hoppers crossing who was robbed(and the culprits were arrested).

I would say to the students that they had 500 people to a quiet rally and couldn’t stop the moronic element of their group from doing the wrong thing but they want to tar all australians with the actions of a few low lifes. Racist? Moi? What would they like the police to do, lock up all those that the indian students dont like the look of (untouchables anybody?). We have no class system indentured in this country and some of us dont want it.

Judith: This comment is racist if you are looking for racism. It is good advice to anybody travelling on the western suburbs transport at night. Dont show your wealth and keep your head down. Last year another policeman said that the indian students cause themselves trouble by talking in their native tongue. I put it to you that that is as racist and ill educated as can be.

Frank: There are a lot more unreported. Evidence please this isnt 3aw

Stephen: The problem is the student association dont want the problem fixed. Who are they blaming? Do they have solutions or are they simply using the tactics that the vic government crumbled in to a couple of hundred cab drivers against the wishes of other cabbies. They want publicity and nothing more.

So now every time an indian group of people have a ptroblem are they going to shut down the cbd?

The last time the age did this we had the video of the men bashing the man at sunshine station three days later. What will be the results of this beat up?