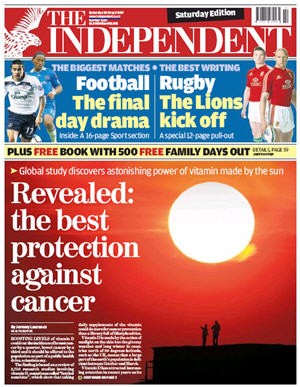 Revealed: the best protection against cancer – Global study discovers astonishing power of vitamin made by the sun – The Independent, London Stewart saga haunts Rees – The sacking of the former minister is quickly turning into a nightmare for the Premier, writes Lisa Carty in the Sydney Sun Herald

Forget sleaze and innuendo, just pick a water fight – Brian Costar in the Sunday Melbourne Age believes the announcement by Opposition Leader Ted Baillieu at last weekend’s Liberal Party state council that he was going to make Labor sleaze a major campaign (including another recycling of the Guilty Party tag that bombed so badly in 2002) is politically unwise and smacks of desperation. Now, the sound of spring is at risk – The UK Independent reports that the cuckoo joins the Red List of Britain’s most endangered species as migrating birds vanish from our shores

Ban Big Ted in clubs: has MP gone bananas? – Sydney Sun Herald reports senator Nick Xenophon has provoked protest from clubs and the ABC for suggesting Play School, Bananas In Pyjamas and other children’s concerts be banned from licensed venues.