There’s nothing that Canberra likes more than talk of an early election and so it is this morning with all the major papers speculating about emissions trading becoming a double dissolution issue. 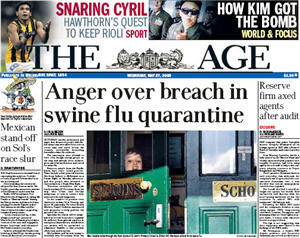 Rudd no to delay on climate bill – Melbourne Age

Coalition digs in over bill on emission tradings scheme – The Australian 900 boatpeople seized in Indonesia en route to Australia – The Australian Many divisions make a mess – Michelle Grattan writes in the Melbourne Age that efforts to get an emissions trading scheme have turned into a shambles.


Keep up the good work, old chap – Ross Gittins on the retirement age in the Sydney Morning Herald

Silly tourists, don’t expect us to save you – Alexander in the Sydney Morning Herald

Cool, calm and collected not cutting it with voters says Shaun Carney in the Melbourne Age Our Crumbling Foundation – Bob Herbert writes in The New York Times that the link between the need to rebuild the nation’s infrastructure and the crucial need to find rich new sources of employment in this economic downturn should be obvious, a no-brainer.

Grim days ahead for the Murray – Melbourne Age

Ben who? – Gabriella Coslovich in the Melbourne Age on the new editor of The Monthly.

My advice on chick and lad mags: burn before reading – Catherine Deveny in the Melbourne Age


Libel Tourism – a New York Times editorial argues that Congress needs to pass a law that makes clear that no American court will enforce libel judgments from countries that provide less protection for the written word.

Liberated and Unhappy – Ross Douthat writes in The New York Times that all the achievements of the feminist era may have delivered women to greater unhappiness. His article is based on “The Paradox of Declining Female Happiness,” a provocative paper from the economists Betsey Stevenson and Justin Wolfers.

Bedroom ad ruled offensive to men – the Advanced Medical Institute has been forced to pull its latest television advertisement on the grounds it ridicules and shows contempt for men suffering from premature ejaculation says the Sydney Morning Herald.

For Jaeger, the Point Is Love – Tennis Prodigy Andrea Jaeger, once ranked No 2 in the world, now an Anglican Dominican Nun, Wishes to Show Compassion She Once Craved – The Washington Post