Our new Leader of the Opposition 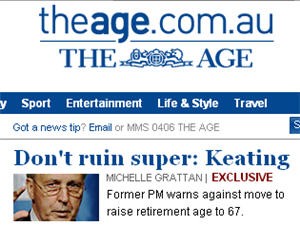 Former Labor leader Paul Keating has emerged to lead the opposition to a key element of the Labor Budget. The architect of compulsory superannuation back in the days of Hawke has joined some key unions and come out against raising the retirement age to 67.

Don’t wreck super: Keating – Paul Keating and Bill Kelty, joint architects of Australia’s compulsory superannuation system, have strongly warned against any move to raise to 67 the age at which people can take their benefits. – Melbourne Age.

US needs to stop digging hole through to China – Peter Hartcher looks at credit worthiness, the US and China. – Sydney Morning Herald

Rudd on the road to ruin – Malcolm Colless in The Australian

Share error exposes Labor’s blind spot – Michael Stutchbury argues that the Rudd Government’s backdown on employee share ownership tax breaks has exposed one of its biggest policy blind spots. That’s the lack of any formal policy, or even rhetorical pretence, for promoting workplace productivity. – The Australian

Heads of state are above the fray – Gerard Henderson reckons political debate will be healthier in Australia when political conservatives and social democrats alike accept that the offices of the governor-general and prime minister are at the core of Australian democracy and deserve respect. Sydney Morning Herald

Coalition gives ETS ultimatum – Opposition will push the Government to defer its emissions trading legislation until the Copenhagen climate conference has been held. But it will vote the scheme down if a delay is rejected.Melbourne Age 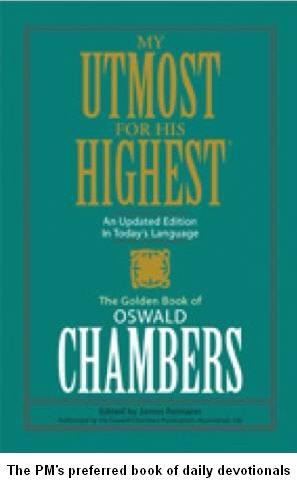 Kevin Rudd starts the day with a prayer – Rudd has revealed he tries to start every day with a reading from a prayer book. But the PM admitted he does not always remember the Christian missive that life is not “all about me”. “When I manage to remember that principle . . . I’m much the better person for it,” said Mr Rudd, who has been criticised for a tantrum on a VIP plane and is known for fruity language in private. Mr Rudd told the Salvation Army’s War Cry his preferred book of daily devotionals was My Utmost for His Highest, which features a spiritual truth for every day of the year. – Melbourne Herald Sun

Whatever turns him on and doesn’t influence his parliamentary obligations. After George W’s whacky abuse of religion to the detriment of world peace I get nervous when influential people start endorsing life’s props and cures. Rudd’s heartland is where the separation of powers rule remains forever under threat so lets hope his spruiking of daily devotionals is no more than a pointer to the Salvation Army Red Shield Appeal. By the way – did he donate as the Opposition might say ‘in monetary terms’, or is this his contribution to the fund-raiser? And did it come from his electorate allowance?