The American Customer Satisfaction Index tracks how happy 'merkins are with various industries and businesses throughout the year. Guess which one makes them least happy.

The American Customer Satisfaction Index tracks how happy ‘merkins are with various industries and businesses throughout the year. They do this by a rather complex formula explained here, but essentially, it works something like this:

Things are given a score out of 100 for how good or bad people think they are. Then economists write some high-fallutin’ commentary about What It All Means and other people stroke their beards and say “Mmmmm” and it all goes into some sort of big marketing machine and magic happens and somehow we all end up buying more things.

Their results for the first quarter of 2009 just came out, and though I can’t perform any meaningful analysis on them, they do make for some interesting reading.

Let’s make some sweeping generalisations, shall we?

Olive Garden Restaurant. Americans gave this chain of Italian restaurants a score of 81, which is really high. Americans  prefer fast-food pasta to Cable TV (63) and Microsoft (70).

Southwest Airlines. Another high-scoring company was Southwest Airlines, who, I believe, are a budget airline akin to Virgin Blue and scored an 81 — beating out not only American Airlines and United, but also McDonald’s (70) and telephone companies (72). Americans prefer budget air travel to cheap hamburgers.

FedEx. Americans like getting packages in the mail more than electricity. The postal delivery service FedEx scored an 82, putting it ahead of Motorola mobile phones (72) and Energy Utilities (74). 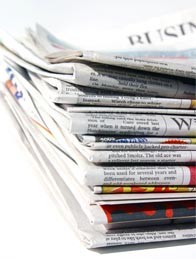 Newspapers. Wow, Americans are pretty dissatisfied with their newspapers, giving them only a lowly 63. That means they prefer KFC (69) and Hospitals (77) to newspapers, which is a pretty damning indictment.

In an age of business disruption, McDonald’s isn’t going anywhere