Will under-67-year-olds be worse off on the dole instead of the pension? We crunch the numbers.

Perhaps the most unpopular policy decision in Budget ’09 was the Government’s announcement that it will raise the aged pension eligibility age — by 2023, it will only be available to those over 67. Pollsters even suggest it’s what led to a sharp drop in Kevin Rudd’s popularity.

The new policy would suggest that in 2023, 65- and 66-year-olds will either have to keep working, or take the dole as they wait for the pension. But what does that actually mean? Are people right to be peeved on behalf of their future selves?

Admittedly, by 2023, the whole public welfare system could have changed, but we thought we’d crunch some numbers anyway to look at the dollar difference between the current pension and the dole.

Not including extras, the difference between dole and pension is at least $66 a fortnight. Here’s what that looks like in Graph Form: 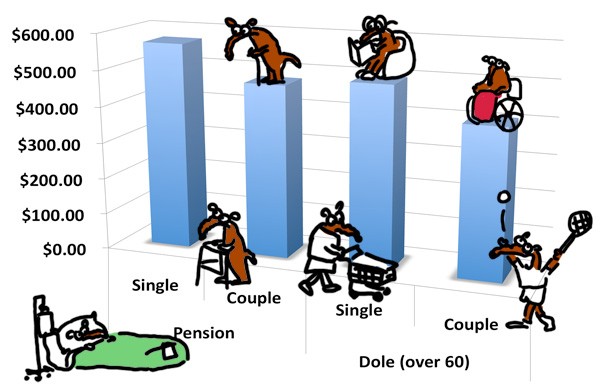 Defending the decision to not give more money to the unemployed in Budget ’09 (while handing out more to pensioners), Wayne Swan yesterday argued that “it’s wrong to compare unemployment benefit, which is a temporary benefit, to a long-term retirement benefit.”

But just what should we expect of a 64-year-old on Newstart — to be looking for work? Returning to study?

Each is also eligible for some benefits, which looks like this*: 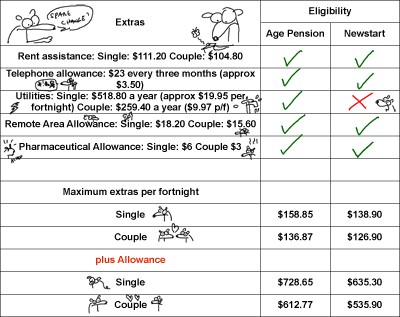 *We have made an assumption that people of this age don’t have dependent children (extras payments change slightly depending on this variable).

(NB. Those on Newstart allowance are also eligible for the Education Entry Payment, Work for the Dole Supplement, and the Pensioner Education Supplement, but we felt those aren’t of great relevance to your average retiree. Still, you can view the full list of available benefits here).

Kevin Andrews, don’t pick on the disabled and those on the dole