The News Ltd Sunday tabloids were tarting a "newspaper revolution" last weekend that had a far more crass motive: cross-promoting a movie from the Fox film studios.

The News Ltd Sunday tabloids were tarting a “newspaper revolution” last weekend that had a far more crass motive: cross promoting a movie from the Fox film studios.

Sydney’s Sunday Telegraph was the outlet chosen in Sydney for the odd new promotion yesterday. Readers in Sydney would not have realised the same promotion popped up in the tabloid Sundays in Brisbane, Melbourne, Hobart, Perth, Darwin and Adelaide:

The Sunday Telegraph has become part of a newspaper revolution, where readers get the chance to enter an interactive digital world.

Using a new technology powered by Total Immersion, our readers will be among the first to access the digital experience, called Papermotion, that will bring newspapers to life like never before.

The technology has been brought to Australia through French company Total Immersion’s partnership with Dreamscape Group.

Take the advertisement on Page 23 of The Sunday Telegraph, then LEARN HOW TO PLAY BY CLICKING HERE on your computer and hold the ad in front of a webcam.

Today, readers will be able to celebrate the release of the new Ben Stiller film, Night At The Museum 2, by activating a virtual-reality world where they can interact with characters from the film.

Only one small point was missed in the Page 2 promotional spiel: Night At The Museum 2 is a 20th Century Fox film, so anyone using this “newspaper revolution” is actually helping promote the movie for the owners of 20th Century Fox, which is… News Corp, owners of the Sunday Tele (via News Ltd in Australia). The ad on Page 23 has the 20th Century Fox logo in about four point type in the bottom right hand corner. That’s not prominent, it’s so small as to be almost invisible. 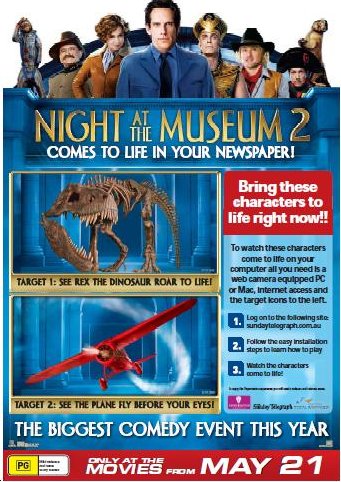 There was no disclosure in the Page 2 blurb for this “revolution”.

So, far from being a “revolution” it’s yet another tiresome promotion for a Rupert Murdoch-owned product, dressed up as an obscure benefit for readers. The media goes on rightly about cash for comment scams in Radio and TV; but what about cross promotion in News Ltd papers?

By the way, the promotional blurb (and its lack of disclosure) was prominent on Page 2 of the Tele, to the right of the small apology to Pauline Hanson for claiming “those nude” photos published on March 15 were of her. The apology was given by Telegraph editor, Neil Breen, who had said that it was his job if the photos were not of Ms Hanson. Breen is still editor.