For the first time, GQ has revealed the top secret briefings issued by US Defense Secretary Donald Rumsfeld's Pentagon not long after the Iraq invasion. Tacky is a kind interpretation; dangerous is another.

For the first time, GQ has revealed the top secret briefings issued by US Defense Secretary Donald Rumsfeld’s Pentagon not long after the Iraq invasion.

Hardly clinical or even instructional, they’re instead a mash-up of ideology and bad design, with Biblical passages accompanying triumphal war scenes.

“This mixing of Crusades-like messaging with war imagery, which until now has not been revealed, had become routine,” writes Robert Draper, author of biography Dead Certain: The Presidency of George W Bush, in the accompanying article. 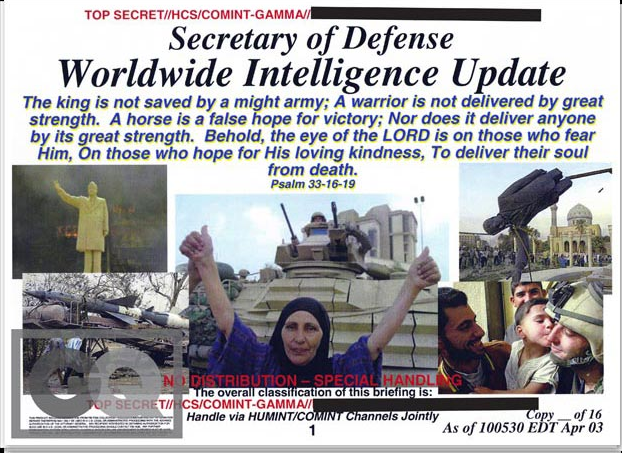 The Worldwide Intelligence Update was a “daily digest of critical military intelligence so classified that it circulated among only a handful of Pentagon leaders and the president; Rumsfeld himself often delivered it, by hand, to the White House.”

While the cover sheets were the brainchild of Major General Glen Shaffer, when Pentagon colleagues complained that “including a religious message with an intelligence briefing seemed inappropriate,” Draper reports that  “Shaffer politely informed them that the practice would continue, because ‘my seniors’ — JCS chairman Richard Myers, Rumsfeld, and the commander in chief himself — appreciated the cover pages.”

Clearly, not everyone was on board with the Crusade Diaries — Draper was leaked the briefings by a government official “disturbed enough by these biblically seasoned sheets to hold on to copies”.

Gawker is running picture extracts from the briefing. You have to wonder, writes Foster Kamer, “was Rumsfeld sitting over a well-to-do Department of Defense intern, going through loads of pictures and trying to decide what colors he wanted which quotes to be? Or did he do it himself? Either way, these things have more in common with the Zodiac Killer than anything any kind of defense briefing should even remotely look like.”

Just imagine the reaction if these had leaked during the Iraq war, writes James Forsyth at Spectator. “The incident would have played into the charge that the United States was trying to impose Christianity on the Muslim world … And to what end, what upside was there to the use of these quotes? None but possibly a brief motivational buzz for those who saw these quotes.”

As Andrew Sullivan puts it for The Daily Dish:

Draper’s article explores the Rasputin-like hold that Rumsfeld had over Bush — and how that compromised situations as diverse as the Iraq war, America’s relationship with Russia and Hurricane Katrina.

As for the Biblical quotes on the briefings, Rumsfeld “likely saw the Scriptures as a way of making a personal connection with a president who frequently quoted the Bible.” While he could distance himself from their creation, they smacked of his cunning, writes Draper. “And as historians slog through the smoke and mirrors of his tenure, they may find that Rumsfeld’s most enduring legacy will be the damage he did to Bush’s.”

There’s an interesting side note for Australia — and another signal of former PM John Howard’s pull with the US administration:

Rumsfeld delayed the implementation of a 2004 presidential order granting our Australian and British allies access to the Pentagon’s classified Internet system known as SIPRNet. “He always had what sounded like a good reason,” says one of Bush’s top advisers. “But I had a lot of back channels and found out that it was being held up.” It finally took Australian prime minister John Howard forcibly complaining to Bush about the matter in the fall of 2006 for SIPRNet to become accessible.

Park that thought … is Don, is dead … credit where it’s due, please