Rumsfeld and Cheney: torture as self-justification

"He’s a ruthless little bastard. You can be sure of that." So said Richard Nixon of Donald Rumsfeld back in 1971.

“He’s a ruthless little bastard. You can be sure of that.”

So said Richard Nixon, a man who knew something about ruthlessness and bastardry, about Donald Rumsfeld back in 1971.

GQ today provides a fascinating glimpse of the man at work. In the early days of the Iraq war, Rumsfeld was responsible for regular briefings known as Worldwide Intelligence Updates, often personally delivered to the White House.

On their covers, they featured colour photos from the war, adorned with passages from the Bible. Given Muslim sensitivities about the war as a “crusade”, the linkage between battle reports and scripture would have been disastrous if leaked. Besides, Rumsfeld himself had never shown much concern for religion. So why the quotes?

Presumably because he understood how best to soothe the man-child allegedly running the country. Famously, Bush didn’t read the newspapers and relied on aides for knowledge of the outside world. The President also believed he’d received a divine mandate to attack Iraq: (“God would tell me ‘George, go and end the tyranny in Iraq.’ And I did.”) Thus when the war effort ran into problems, Rummy calmed his commander-in-chief with biblical wisdom.

On 3 April, for instance, the Worldwide Intelligence Update ran: “Have I not commanded you? Be strong and courageous. Do not be terrified; do not be discouraged, for the LORD your God will be with you wherever you go.”

With the President duly pacified, Rumsfeld could busy himself with his other obligations. Like, for instance, using torture to produce a link between Iraq and al Qaeda.

That is, there’s increasing evidence that so-called “enhanced interrogations” were pushed by senior Bush officials to justify the war on Iraq. Last month, McClatchy newspapers reported a former senior U.S. intelligence official as saying that the pressure for such techniques came from Rumsfeld and Cheney, increasingly frustrated about their inability to link Iraq with bin Laden.

Elsewhere, NBC’s Robert Windrem says that Cheney’s office suggested waterboarding an Iraqi prisoner suspected to have knowledge of al Qaeda connections; a report on pre-Iraq war intelligence reveals that the first questions put to Khalid Shaikh Muhammad (as he was waterboarded hundreds of times) related to Iraq; a de-classified Senate Armed Services Committee report quotes army psychologist Maj. Paul Burney explaining that his work on a Behavioral Science Consultation Team was “focused on trying to establish a link between Al Qaeda and Iraq”; Lawrence Wilkerson, former chief of staff to Colin Powell, writes that the administration’s “principal priority for intelligence was not aimed at pre-empting another terrorist attack on the U.S. but discovering a smoking gun linking Iraq and al-Qa’ida.”

The last point’s worth reiterating. Have a look at the gallery of new Abu Ghraib photos recently leaked by SBS, since they show “enhanced interrogations” in progress: the cells spattered with blood, the men hanging upside down or being bashed by thuggish guards.

Those techniques were never, it seems, about ticking time bombs. They were about protecting the political reputation of men like Rumsfeld and Cheney, who launched an apocalyptic war and then needed some basis to justify it.

Contrary to Karl Rove’s bizarre article in The Australian today, the implication of Democrats in the waterboarding program doesn’t lessen the need for an inquiry. As Rumsfeld’s Bible would have it (Mark 4:22), “for nothing is hidden, except to be revealed.” Bring on the investigation. 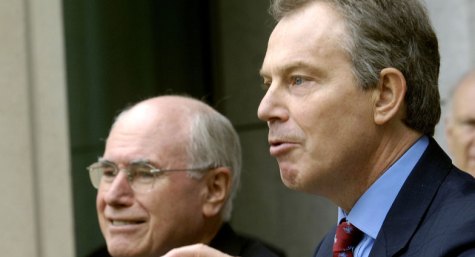 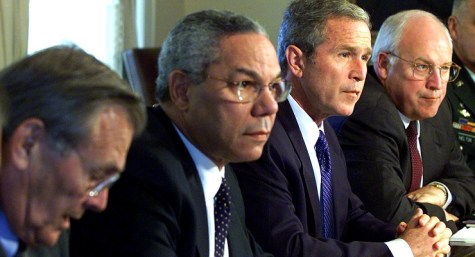 Colin Powell may be gone, but his doctrine lives on in Joe Biden

Why Bush invaded Iraq: the war on Gog and Magog

It is difficult to explain the actions of the Bush Whitehouse without the understanding that they felt the end of the world was generally a good thing.

Ghastly, and they will get away with it. Barak doesn’t appear to relish dealing with these criminals. Just as our Government won’t deal with the Australian Triumvirate who approved torture and war.

Good story, Jeff. One query though: you say that Rumsfeld & Cheney “launched an apocalyptic war and then needed some basis to justify it.” My understanding of the evidence so far, though, is that most of the torture happened before the war – they were trying to obtain the justification in advance. More like a premeditated design than a desperate effort to cover their tracks.

Torture is barbaric & should not be used in any manner by so-called civilised nations. More over it should not be secretly condoned or pushed under the carpet by so-called civilised societies. We are better than this.
Barak Obama’s administration will be tainted by not instigating a full enquiry, with the view to prosecution of the people who instigated this terrible crime. The Americans weren’t long at setting up War crime tribunals after the war to bring prominent Nazi’s to trial & expose their wrong doing – what is the difference now.