The $2 billion racing industry is too important to be left in the hands of anachronistic racing clubs guided by part-time boards comprising old racing buffs.

Accountancy firm Ernst & Young is about to deliver its review of the Sydney racing industry to NSW Gaming and Racing Minister Kevin Greene, a former school teacher.

Tumultuous events have overtaken the consultancy since it was given its three-month brief to investigate a merger between the Australian Jockey Club and its rival, the Sydney Turf Club.

A membership coup resulted in the defeat of the AJC chairman Ross Smyth-King at a specially summoned meeting at Randwick and the CEO Norman Gillespie, former boss of the Sydney Opera House, was shown the door a few days later.

Last weekend advertisements for a replacement CEO appeared in leading newspapers. Although no salary was mentioned the successful applicant can expect to trouser more than $320,000 a year.

It was significant that candidates were invited to send their applications to the new chairman himself, Ron Finemore, and not an outside firm of headhunters.

Ernst & Young consultants received short shrift when they visited the AJC’s headquarters at Randwick and the STC’s headquarters at Rosehill. It seems that neither club wants to dissolve its identity and war plans are being devised to fight the Rees Government tooth and nail.

From the government’s point of view, the $2 billion racing industry is too important to be left in the hands of anachronistic racing clubs guided by part-time boards comprising old racing buffs.

It wants a commercially driven, professionally run business which will bring tourist and gaming dollars to Sydney and eclipse the racing offered by Melbourne’s three clubs at Flemington, Moonee Valley, Caulfield and Sandown.

One option is to abolish the AJC and STC which were set up by parliamentary legislation and to reconstitute Racing NSW as the sole authority to control metropolitan and regional racing.

The government has no money to fund the proposed expanded authority so it will be bankrolled by the sale of STC-owned Canterbury racecourse to developers.

Past premiers have taken on Sydney’s racing establishment with reform plans and most have failed. That’s because the clubs have had the ear of media bosses like the late Kerry Packer, Labor and National Party politicians, sports editors and shock jocks like Alan Jones.

Well-connected lobbyist David Tierney, a close political associate of former premier Morris Iemma and a former communications director with the Olympics construction company Multiplex, was paid $50,000 a year by the AJC and STC to represent their narrow, self-serving interests.

One of the reasons Smyth-King fell foul of the old guard at the AJC is that he terminated the club’s $25,000 contribution to Tierney’s bank account.

Sydney’s racing clubs no longer command the clout that they had in the 20th century and they no longer strike the same fear into Macquarie Street. Their days are numbered but the nurse hasn’t got around to telling them yet. 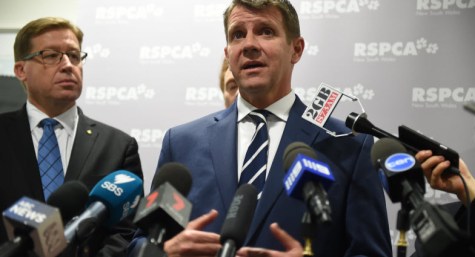 It’s the 21st century……..and it’s permanently over for all of them.