US President Barack Obama has officially hit 100 days in office. We take a look at how the pundits are grading his performance thus far. 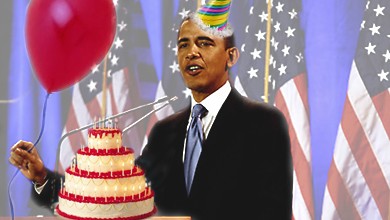 US President Barack Obama has officially hit 100 days in office — a slightly arbitrary milestone, but one that is traditionally said to be the measure of a president’s early success.  Whether there’s much merit to this marker or not, the press have certainly taken it upon themselves to further dissect the most over-analysed presidency in history, with every commentator giving an assessment on his performance thus far.

According to Slate, the Obama team shouldn’t look this gift horse in the mouth; sure there’s nothing particularly telling or definitive about 100 days, but it gives them a chance to brag about their achievements in office without looking conceited, and with a 61% approval rating, they have something worthwhile to crow about.

Over at HuffPo, every blogger and their mum has done an appraisal. Former US Secretary of State Madeleine Albright reckons Obama has done well despite being dealt a pretty crappy hand or recession, war and piracy. ZP Heller gives him a “D” for his first 100 days in Afghanistan, though Marc Ginsberg gives him an “A” on foreign policy, claiming he has “inspired a recalibration of America’s tarnished image in the world.” Ms Huffington herself says he’s been a winner on the budget, stimulus package, national service and foreign affairs, but less than impressive on the bank bailout, Afghanistan, torture and gun control.

For something different (and a delightfully snarky analogy), Reason declare:

President Barack Obama is about as visionary as the guy who invented Dippin’ Dots, Ice Cream of the Future. Far from sketching out a truly forward-looking set of policies for the 21st century, as his supporters had hoped, Obama is instead serving up cryogenically tasteless and headache-inducing morsels from years gone by.

It’s a fairly damning assessment of a president whose current popularity they say is based mainly on the fact that he proceeded one of the “least popular and least effective presidents in U.S. history”

The Wall Street Journal characterise President Obama as a contradiction who defies such easy labelling — a sign that Americans are wearying of ideological labels, or a sign of a leader trying to straddle both sides of the fence?

Unsurprisingly, the National Review Online see Obama in far more clear-cut ideological terms, with editor Jonah Goldberg calling him an arrogant “left-wing culture warrior”, and blaming the media for portraying him as anything but during his first 100 days.

On the other side of the political spectrum, the Guardian‘s Michael Tomasky posists that it isn’t so much what Obama has done in his first 100 days, but the new tone he has set for the country, better engaging US citizens and putting a damper on the climate of fear set by the Bush administration.

Newsweek believe Obama has done a good job of making friends at home and abroad, but reckon the next 100 days will be his biggest diplomatic test, channeling a bit of Gwyneth “Steamed Peas” Paltrow to predict some of the potential “frenemies” that could cause trouble for him.

Is the Washington Examiner’s Byron York playing the race card in his assessment?

If a new survey by the New York Times is accurate, the president and some of his policies are significantly less popular with white Americans than with black Americans, and his sky-high ratings among African-Americans make some of his positions appear a bit more popular overall than they actually are.

As Princess Sparkle Pony says: “OK, do me a favor and re-read that last part. It seems to me that Mr. York is saying that sure Obama’s popular, but popular with black people so it doesn’t count as much. No? Yes? Because that is what he’s saying, right?” Yes.