Meaty snippets from the home of government by Richard Farmer.

Value in Chinese lunches. The legacy of Mick Young lives on in the Australian Labor Party. All those long Chinese lunches the former Federal Secretary and Cabinet Minister pioneered built the Labor-China connection that these days results in dollars. The 2007-08 returns from the federal electoral commission have Chinese businessmen prominent on Labor’s list of donations. Dr Stanley Ho and others associated with him in property developments lead the way. Not that the Coalition partners have done badly from their own Chinese connection. Companies associated with the Hong Kong property developer Dr Chau Chak Wing found $230,000 for the Liberals and $250,000 for the Nationals. Labor looked positively hard done by with a mere $281,000 but the total contribution of $761,000 played a major part in financing the Australian electoral process.

The list of major donors once again shows that Dr Wing was not alone among property developers who consider financing the democratic process is a vital part of being a good corporate citizen.

And the Pharmacy Guild of Australia again deserves a special mention. Its contributions totaling $210,395 again escaped the scrutiny of most commentators this morning. Very cleverly the Guild exercises its philanthropy with a lot of comparatively small donations. Only when you take the trouble of adding them all up do you realize that your family chemist is as dedicated to democracy as your average property developer.

And if you are wondering who the Ms Josephine C Armstrong who flung a lay $600,000 to the Liberal Party is then have a look at comment 477 on the Poll Bludger blog. Sometimes political party fund raisers can just be lucky!

The Murdoch fight back and Farmer’s form guide. What’s the point of owning newspapers if you can’t get a plug in them for your own product might well be a News Corporation motto. Thus is was that the London Times entered the debate on the side of Slumdog Millionaire distributed by its Hollywood affiliate. The Times website carried this spirited defence by the Slumdog team against the accusation that their Oscar best film favourite was exploiting the poor of the Mumbai slums.

How very philanthropic of director Danny Boyle to come up with an ambitious plan to pump “significant” profits from the film back into the Mumbai slums where the film is set. I wonder what would have happened if there had not been the criticism?

Because the temperature was hot at the weekend and my house does not have the luxury of air conditioning, I made my contribution to those profits by hopping into a cinema to see Slumdog Millionaire for myself and I left with the impression that the critics of exploitation are being a bit precious. An entertaining enough yarn, I thought, but if it is the best film of the year then it’s no wonder I rarely go to the cinema. And as for Milk, which I also subjected myself to, I can only say that there must be a lot of s-xual equality enthusiasts involved in the Academy’s selection process.

A little clue from Calgary. The Opposition Leader Malcolm Turnbull clearly thinks he is on a winner with his continued tut-tutting about the Australian budget heading into severe deficit territory. It does not take a political genius to work out that the market research people are reporting that the public are very wary of the idea of a government spending more than it earns. All those years of rhetoric by former Treasurer Peter Costello about terrible Labor Governments leaving the country in debt clearly made their mark. I have not seen any published Australian opinion poll research on the subject but I expect the findings would be the same as these recently in Canada’s Alberta province: 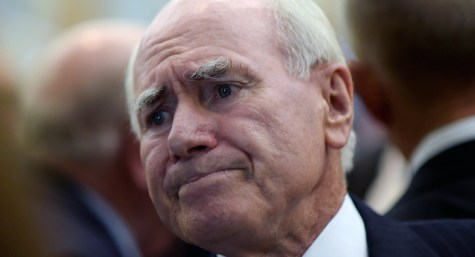