The Parisien model for child care

With one of Europe's highest birth rates, the French have taken a different approach to providing child care, explains Jonathan Walter.

From Paris, I’ve been following the headlines about the collapse of corporate child care in Australia, and feeling thankful that the French — with one of Europe’s highest birth rates — have taken a different approach to providing child care.

About four months before our child was born, we began the scramble to find a child care place, first putting our names down on the long waiting lists for the council-operated daycare centres. We knew this was an unlikely prospect and so investigated other possibilities, including sharing a nanny with another family and something called a “crèche parental”.

Nannies are difficult to find and expensive, so we went for an interview at our local crèche parental. We discovered it was a daycare centre managed by an association of parents, operated by childcare professionals and funded by government grants and fairly modest fees, based on your income and ranging from 100 to 600 euros a month for eight hours of day care per day (in 2003 about $A140 to $A840).

It was the cheapest option available, but involved one of us working a half-day a week at the centre, and also taking on one of the chores — ours was buying all the cleaning products, nappies etc, while others did the accounts, hired staff and interviewed prospective parents.

There was also a monthly meeting and a working bee weekend three or four times per year when rooms were repainted, repairs were made and toys cleaned.

However, the time commitment was well worth it and the crèche, with only about 16 children, quickly began to feel like an extended family as we got to know the other children, their parents and the staff.

There were the menial chores like packing and unpacking the dishwasher and keeping the washing machine and dryer going constantly to keep pace with the dirty clothes, bibs, towels and tea towels.

But there was also plenty of time to help the staff look after the children; play games, read stories and share a meal with them. It was a unique opportunity to watch your child interact with the other children and for him to learn to share with others and to participate in group activities. We also got a preview of the next stage in his development by watching his older peers. There was lots of good advice and support about the various problems with raising babies and toddlers which was invaluable and removed a lot of the anxiety about parenting.

The monthly meetings provided an opportunity to learn about and discuss the management of the centre, to plan upcoming events and to share ideas for new activities. One of these was the farm weekend where the older children are taken on a farm stay for a weekend by the staff, which became a regular event.

There were the occasional disputes, as in all groups, between parents or staff, but these were amicably resolved and the general good of the crèche and the kids was the overiding principle, which made our three years there a rewarding and enriching experience.

When our child later moved on to kindergarten and we left him at the front door of the classroom in the mornings and picked him up there in the afternoons, we realised how lucky we had been to have participated so fully in his early education.

This model of child care is something my partner and I would strongly recommend to communities looking for new solutions in the wake of ABC Learning’s collapse. 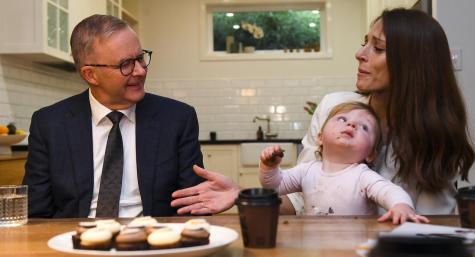 The weekend’s most embarrassing sentence?

This is an interesting, and great, solution. I think the childcare laws here would prevent something so sensible from happening? I remember a case a few years ago about a parents tennis tournament in the country, where the parents took turns to look after the children. Sadly, it was a breach of childcare laws and had to be stopped. These rules make it more difficult for affordable childcare to be available, meaning that parents have to rely on unstable corporate structures susceptible to the whims and unethical practices of their directors.

Interesting solution. Well worth considering. Thanks.

Sub editor: A native of Paris is a Parisian, spelt with an ‘a’. Parisienne in the French language