P*nis in a park bench: News.com.au’s top journalism for 2008

Yesterday, news.com.au released a list of their 100 most read online articles for 2008. “Along with all the regular news, it’s a treat of the weird and wonderful, the rich and the famous” is how they describe the results, which is fairly accurate, except for the “regular news” part, which we had considerable trouble finding.

Celebrities and sports stars were the next most popular, with 32 articles including names like Gordon Ramsey (#91), Lara Bingle (#39), Corey Delaney (#85 and yes, we counted him as a celebrity), Kyle Sandilands (#47) and Stephanie Rice (#40 and #5) pulling in the readers.

Following that was 17 articles about death or injury, 11 about freaky people, animals or aliens (including Doctors give ‘Tree Man’ hope for future and Python nearly swallows wallaby whole at Cairns university), nine about money and three about the iPhone.

Finally, we counted two whole articles related to politics. Firstly, Elisa Roberts [sic] friendship with Amamoor teen divides town (#73), which really falls more into the s-x category than politics, leaving us with one serious political article in the entire 100: Kevin Rudd’s national apology to Stolen Generations at #27 on the list — 10 places behind Man’s p-nis stuck in park bench at #17.

But who’s really to blame for such an insipid list? The News readers and their low-brow tastes, or the editors, journalists and web editors who continue to push these tabloid stories on the masthead’s front pages?

The Daily Tele’s front page today features such hard hitting reporting as Finger Lickin’ Frolics — a story from the US featuring three scantily clad young ladies bathing in a KFC chicken-washing sink (plus the obligatory photo gallery), Dead l-sbian ‘firing blanks’, Schoolboy shot through eye with arrow, and an article about MP Kate Ellis being offered $30k to do a nude photo shoot.

It lines up pretty well with the results of the year’s top 100 — of the seven main articles up on their page as of this morning, three are about s-x or nudity, three feature death or injury, some are about both, and one is only vaguely related to politics because Kate Ellis’s t*ts come with her to Parliament. (It should be noted that a random sampling of a Fairfax site doesn’t fare much better).

Meanwhile, world leaders are deciding the fate of our environment in Poland, there have been suicide bomb attacks in Iraq, there’s a cholera outbreak in Zimbabwe and violent outbreaks in the streets of Greece.

But how many of you clicked those links — and how many wanted to know more about the man whose p-nis got stuck in a park bench? 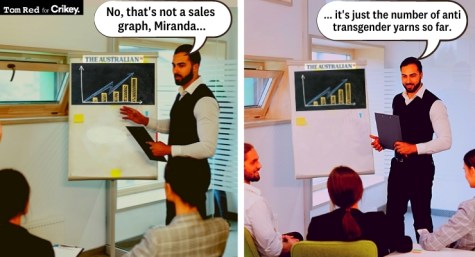