Austrians discover the timeless appeal of the right

It was deja vu all over again in Austria yesterday, with the country's neighbors shocked by the strong performance of the far right, writes Charles Richardson.

It was deja vu all over again in Austria yesterday, with the country’s neighbors shocked by the strong performance of the far right in Sunday’s parliamentary elections.

Last time this happened was in 1999, when Joerg Haider’s Freedom Party reached 26.9% of the vote (as usual, Adam Carr has all the figures) and the following year was taken into government as a junior coalition partner to the centre-right Austrian People’s Party. This provoked outrage across Europe and, for a time, other EU governments curtailed their relations with Austria.

Nonetheless, if the aim of the coalition was to contain right-wing extremism, it worked. At the following election Haider’s vote was down to 10%; his party then split, and after the 2006 election the extremists were evicted from government in favor of a grand coalition between the People’s Party and the centre-left Social Democrats.

That coalition broke down earlier this year, and voters have now clearly shown their disapproval of both partners: their combined vote was down by 14.3% and they lost 26 seats. (Official results are here: in German; from Wikipedia). The main Freedom Party won 18%, and Haider’s breakaway group 11%, up almost 14% between them.

It certainly suggests that locking the extremists out is not always the best way to dull their appeal. In government, such parties have to make compromises and become more pragmatic; in opposition, they have full licence to be populist and irresponsible, especially when all the mainstream parties are on the other side.

We had a small taste of this earlier in the month in Western Australia, where some suggested that the Liberals and ALP could co-operate in government to shut out the National Party and its narrow sectional populism. Wiser counsel prevailed, and the Nationals were taken within the tent.

Trouble is, we know this tactic doesn’t always work. The established politicians in Germany who tried it in 1933 with Haider’s more famous predecessor found that they had made a very bad bargain.

That experience gives Europe an unusual degree of sensitivity about Austrian right-wing extremists, so most probably the two major parties – much depleted, but still commanding an overall majority – will patch together their coalition again. But the debate over how to deal with the far right is unlikely to go away. 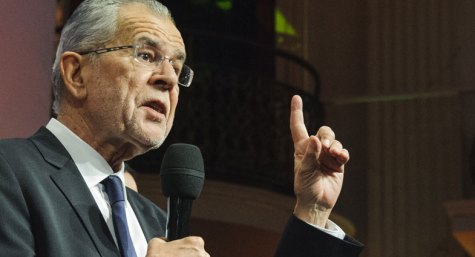 Six ways to deal with the far-right