If we want to use native forests as a means to avoid doing something about climate change, we first have to slow the pace at which we’re destroying them – legally and illegally, writes Bernard Keane.

The National Heritage Trust was a Howard Government creation, intended to: “restore and conserve Australia’s environment and natural resources” via “biodiversity conservation, sustainable use of natural resources and community capacity building and institutional change”.

Its real purpose was to shore up the green credentials of a Government that most environmentalists didn’t trust, while undertaking that beloved activity of the Howard Government, channelling money into rural communities. Two birds with one stone, that sort of thing.

When the Howard Government came to office, land clearing was accelerating in Queensland. Most agricultural land in Queensland was leasehold, and while there were no restrictions on clearing on freehold land, landowners were required to obtain permits for clearing on leasehold land. As more and more attention was focussed on the truly massive scale on which Queensland landowners were clearing, they accelerated their assault on native vegetation, fearful that the Queensland Government would finally be shamed into halting their activities.

But in some areas the rate of land clearing accelerated for other reasons. Crikey has learnt that the Queensland Department of Natural Resources channelled National Heritage Trust funding into a program that led to an acceleration in the rates of land-clearing in Queensland.

In 1996-97, the Department of Natural Resources applied for and obtained funding from the National Heritage Trust for a program called “Property Management Planning Using Landholder Groups“. DNR received $208,100 in 1996-97 and a bit more in 1997-98 for the program, which was run from the Emerald office of the DNR.

It consisted of workshops to explain to landholders what land could be legally cleared, and enable faster processing of land clearing permits. As more and more landholders wanted to clear their properties before the feared regulation of clearing, permits were building up and creating backlogs in DNR offices across the state. The intention of the workshops was to better inform farmers of what minimal land clearing regulations were then in place and expedite the permit approval process.

The workshops were not, as far as can be worked out, intended to actually accelerate land clearing. But that was the direct consequence.

The workshops replaced the previous process of assessing permits one-by-one and meant landowners found out exactly what land on their holdings could be legally cleared, regardless of their specific needs. It also enabled them to organise with the workshops collective clearing clusters with other attendees to negotiate cheap rates from the clearing contractors. Contractors used both the notorious bulldozer-and-chain clearing process and mass distribution of herbicide that poisoned native vegetation. They would work overtime for weeks if not months, including under floodlights, to clear land.

All courtesy of Commonwealth taxpayers.

This was occurring on leasehold land. At the same time, on freehold land, where no land-clearing restrictions applied, landholders were going berserk tearing down everything in sight. No one was doing anything illegal or inappropriate — they were simply doing what the state’s appallingly lax land-clearing regulations permitted them to do, happily administered by a Department that saw its role as implementing those regulations in the most industry-friendly manner possible.

The Emerald workshops were so successful at expediting the land-clearing permit process that they were recommended to other DNR offices as a model for clearing backlogs of permits.

The assault on Queensland’s native vegetation continued until Peter Beattie, having tried to gull the Howard Government into providing compensation for landholders deprived of the right to obliterate their properties, reluctantly regulated it in late 2000 with the Vegetation Management Act. On the eve of the Act’s proclamation, Queensland landholders were clearing at a frightening rate of nearly 760,000 hectares a year, which promptly fell back to 378,000 hectares a year after the new controls came into place.

The (in)effectiveness of the VMA restrictions, however, is demonstrated by the fact that the land-clearing rate across the state surged back to over 550,000 hectares a year in 2003, mostly on freehold land, although the rate had dropped back to 375,000 hectares in 2006.

Queensland sources point out that illegal land-clearing is still a significant issue, and one the DNR refuses to seriously investigate. Fire is a popular method of “accidental” land-clearing among farmers — no one can ever check whether the alleged lightning strike that started a blaze ever actually happened.

The Queensland Nationals want to roll back the VMA — such as it is — and are trying to impose that policy on the new Liberal National Party. All part of the rip-and-tear mentality that has predominated in Queensland — at the highest levels — for generations. There’s still a tendency on the Right to view land-clearing regulation as a sort of communist plot. Climate change reactionary and former ABARE head Brian Fisher once complained that land-clearing restrictions were “frankly irrational.” This is despite the fact that the only reason Australia met its Kyoto carbon emissions target was because of the deceleration of land-clearing, and that “biosequestration” by native forests is now being talked up as another magic bullet solution for climate change.

We’re getting a bit ahead of ourselves. If we want to use native forests as a means to avoid doing something about climate change, we first have to slow the pace at which we’re destroying them — legally and illegally.

Hail the Bligh government … at least for the environment 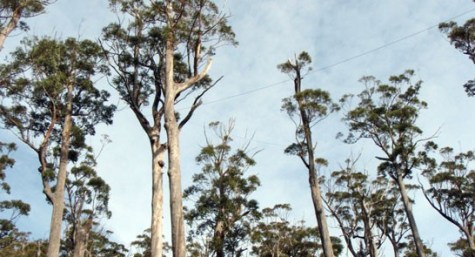 You are barking up the wrong trees. You have been doing your research in the wrong bars.

The threat of this crazy legislation did distort management decisions, but in Queensland even 500,000 hectares does not represent a very big area. Go for a drive and check it out for yourself.

The most striking thing about the Queensland countryside is the scarcity of development. The lack of freehold title for so long inhibited investment in proper management of the land. Without security of title only extractive management is applied.

As for your “some kind of communist plot”. What could that be? Could it perhaps be manifested in the abrogation of private property rights?

Climate change? Have a look at this courtesy of the excellent NZ website http://www.climatedebatedaily.com