Relations between the two Christian Democratic MPs in the NSW upper house, the Rev Fred Nile and the Rev Gordon Moyes, have deteriorated rapidly into state of all-out war, writes Alex Mitchell.

Relations between the two Christian Democratic MPs in the NSW upper house, the Rev Fred Nile and the Rev Gordon Moyes, have deteriorated rapidly into a state of all-out war.

Moyes has drawn a line in the sand by writing a 3,000-word editorial on his personal website condemning Nile’s power grab at the CDP’s annual conference at the end of last month.

Moyes, who was superintendent of Sydney’s Central Wesley Mission for more than two decades, scathingly condemns Nile for being too willing to serve the Iemma Government in the Legislative Council where votes are critical because Labor does not command a majority.

He says Nile was ill-advised to accept the newly created title of assistant deputy president of the LC which came with a $30,000-a-year pay increase because it could create a public perception that Nile was in the pocket of the government.

“Fred’s answer to my warning was that the Government was rewarding him for his years of faithful service,” Moyes writes.

“You would have to be either simple or naïve to believe the Government is paying you $1000 a week more than any other backbencher or opposition or cross bench member out of appreciation of your support in previous years. They pay not out of appreciation but in anticipation of what you will do in voting for key legislation while you remain in Parliament.”

He calculated that Nile and his wife Elaine, a former upper house MP, will enjoy a retirement income of almost $5000 a week.

“No wonder they have recently moved into a palatial new home, purchased two other properties for leasing to others, and a new car that is newer, larger and more expensive than that of the Premier. Fred is no long a poor parson but a multi-millionaire,” he added.

At last month’s annual party conference, Moyes dramatically called on Nile, who soon turns 74, to name the date of his resignation from parliament.

“I had said that both Fred and I were too old for parliament and we should be making way for a younger generation,” Moyes told his website readers.

“I offered to resign to allow a younger person entry into parliament.

“But Fred responded angrily (he responds angrily whenever his age is mentioned) stating tensely that younger members of parliament would not survive.”

Nile, who has just been declared the party’s President for Life, appears to have lost his status with the Festival of Life, founded in the UK in 1971 by the reactionary morals campaigner Mrs Mary Whitehouse with the support of the androgynous pop singer Sir Cliff Richard.

Nile started the festival’s NSW chapter in 1974 and it has existed nationally until July this year when its name was changed to Family Voice Australia and its headquarters shifted to Adelaide under its president, Dr David Phillips.

Phillips explained the name change and the shift to “Christian family values” saying:

“Confusion is even greater in NSW, where many people think the Festival of Light is a political party.

“During a federal parliamentary inquiry into a recent election, a NSW MP wanted to discount our evidence because, he said, ‘You are a political party — you field candidates’. He and others wrongly thought we were part of the Christian Democratic Party. We realized the time had come to change our name to give a clearer idea of what we do”

President Kim Il Nile is yet to follow suit and explain where (or when) he is going.

Nile expells Flash but he won’t be silenced 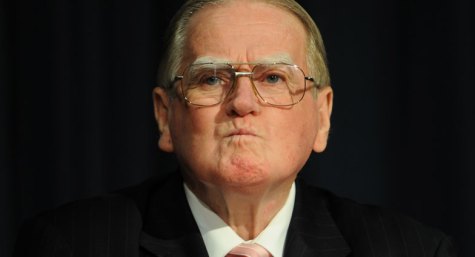