What did TVNZ execs know about reporter’s domestic assault?

TVNZ sports presenter Tony Veitch -- who also used to work for Channel Nine -- has admitted to "lashing out" at his former girlfriend. It's raising questions about what his employers knew -- and what they should have done about it, writes Martin Hirst from Auckland.

The Australian head of news at TVNZ, former Nine journo Anthony Flannery, is caught up in a scandal involving one of the network’s leading stars.

TVNZ sports presenter Tony Veitch — who also used to work for Channel Nine — has admitted to “lashing out” at his former girlfriend. The allegation is that he bashed her so severely she was hospitalised, spent some time in a wheelchair and had to give up her job.

Veitch, who is reputed to earn in excess of $NZD500,000 for his media and public speaking work, then apparently paid Kristin Dunne-Powell more than $NZD100,000 to keep quiet.

Fairfax newspaper, The Dominion Post, broke the story last week and now the New Zealand government is calling for a report into when Flannery and other TVNZ executives were told about Vietch’s alleged actions and what they knew.

The police are also investigating the 2006 assault, which apparently took place at the TV star’s home after a heated argument.

Veitch was to head TVNZ’s Olympics coverage but is now suspended and the issue refuses to go away.

At an emotional media conference last Wednesday, Veitch admitted to “lashing out” at Dunne-Powell, but stopped short of detailing the alleged ferocity of his assault. Newspaper reports quote the woman’s friends as saying four vertebrae in her back were cracked.

This story has dominated front pages here for more than a week. Anti-violence groups and advertisers are saying Veitch should be sacked, but Kiwi employment law makes this difficult.

Now broadcasting minister Trevor Mallard is asking the TVNZ Board to tell him exactly what the network’s executives were told about the incident when Veitch alerted them to it late last year.

Veitch told one Sunday newspaper he regretted his actions and that he would be happy to front an anti-violence campaign to show his contrition. Many domestic violence groups have dismissed the offer, saying Veitch has not yet fully owned up to his actions.

So Far, Flannery and other TVNZ officials have said only that they weren’t made aware of the extent of the victim’s injuries and that Veitch told them it was a civil matter that had been resolved.

Prime Minister Helen Clark is unconvinced. “This isn’t any ordinary issue of alleged domestic assault. This is an issue of a public broadcasting channel which of course runs advertisements like ‘It’s not okay’. Where the public perception of moral crisis is, is when clearly a report of domestic violence is thought to be okay at high levels of the organisation.”

Under New Zealand law, Veitch could face three years in jail if convicted of serious assault. 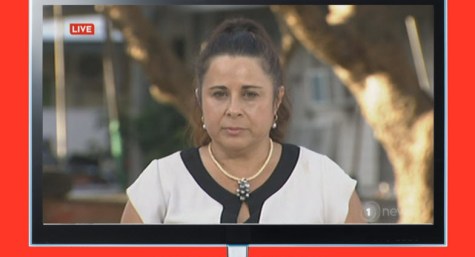