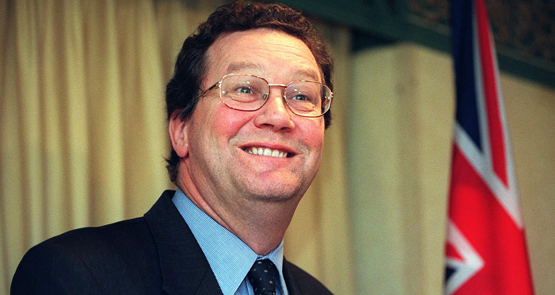 *This article was originally published on July 2, 2008.

The political career of Alexander Downer is coming to a close this week — here’s a highlights package:

Shut up you foul-mouthed bitch.

How the left appeased Hitler, January 2007

Australian Labor wants to retreat to fortress Australia. Its natural instinct has always been isolationism, and its cut-and-run policy in Iraq is the latest incarnation of that tendency. It is madness to think we can retreat from this crucial battle for civilisation and hope the terrorists will leave us alone…. Historically the left has always looked for soft options — from appeasement of Hitler, accommodation of Communist expansionism and unilateral disarmament in the Cold War.

Reported news.com.au: Mr Downer said Kevin Rudd was a “jellyback” for demanding a probe into the Government’s handling of 27-year-old Mohamed Haneef, who was held by police for three weeks before a terrorism charge was dropped. “I think we could sum Mr Rudd up in one word – and that word is jellyback… This is somebody who has decided to change his position because of the media controversy.”

Just putting the pie in the oven, April 2006

I think, on the basis of all that I have seen in the Cole inquiry, I think that its conclusions will be very, very interesting and there is certainly going to be humble pie eaten somewhere. There is going to be a big meal of humble pie eaten by somebody at some time after this report comes down.

“I don’t recall being given that information.”

“Well, I simply do not recall.”

“Well, I can only tell you what I can recall…”

“If he had told me that, I would have thought I’d have remembered it, but I don’t recall.”

“It could have been.”

“I don’t recall them saying that.”

“I don’t recall them saying that to me.”

The Coalition has removed once and for all the threat of Saddam Hussein’s weapons of mass destruction and his brutal regime. It is now supporting Iraqi efforts to bring stable representative government to a country ruined by three decades of tyranny. We must ask ourselves what the consequences would be if we were to cut and run from the violent campaign waged by terrorists and those Iraqis clinging to the past. To cut and run from Iraq, as the ALP would have Australia do, would be the height of irresponsibility – and a fundamental betrayal of Australia’s values and national interests. Proponents of this view would have Australia abandon the Iraqi people to the mercy of terrorists.

I mean, I think [Mick Keelty’s] just expressing a view which reflects a lot of the propaganda we’re getting from al-Qaeda. I think what the bottom line of all of this, is that they, al-Qaeda, are out there running this line on Iraq.

Just doing what any reasonable person would, September 2002

Iraq has been working to increase its chemical and biological weapon capability over the past four years….

As with chemical and biological weapons, the Australian Government has no reason to believe that Saddam Hussein has abandoned his ambition to acquire nuclear weapons. All the circumstances suggest the opposite.

Australian intelligence agencies believe there is evidence of a pattern of acquisition of equipment which could be used in a uranium enrichment program….

The Government’s view is that there is good reason to be extremely worried about the current status of Iraq’s programs. Any reasonable person would have to share that view..

A nightmare for the international community would be for Iraqi weapons of mass destruction to find their way into the hands of terrorist organisations…. recent intelligence sources have confirmed the presence of al-Qaeda members in Iraq.

When we release our domestic violence policy, the things that batter. Our marginal seat strategy, the swings that matter. And our family policy, look this is a reflection of our own home I suppose, the flings that matter.

Sheridan, Bolt and Co: the real butchers of Iraq

In an ABC TV ‘Australian Story’ profile of him last year Downer called Rudd the vainest politician he’d ever known. But then, almost in the same breath, he revelaed the extent of his own vanity by stating he always found tme each day to read fat folders of press cuttings covering all his comings and goings put together by one of his staff! And this from the man who told the AWB enquiry he’d been far too busy to read the numerous messages sent to him by various of his overseas posts warning of AWB’s sanctions busting!

“If he had told me that, I would have thought I’d have remembered it, but I don’t recall.”

After all the other “I don’t recalls”, this one is priceless. Worst Foreign Minister Ever.

I was going to add my own favourite Alexander Downer moment, but suddenly I can’t recall it.

While Belinda Neal is being crucified by Brendan Nelson over some nonsense now would be a good time for those in various Australian embassies and missions abroad to speak up about Downer’s persitent and petty habits of insulting and punishing public servants who do not come to his beck and call and demonstrate due reverence to his Lordship.