Kohler even spooked Kerry O’Brien on The 7.30 Report last night when he finished a panel discussion on the economy with this observation:

The Reserve Bank’s got it wrong on the way up last year with their inflation forecast. There’s no reason to think they’ve got it right in forecasting inflation out to 2010. I think there’s no way that inflation is going to be three per cent in 2010. I think we will be lucky enough not to be in recession.

He followed it up this morning with an even gloomier prognosis on Business Spectator, lamenting Australia’s huge $600 billion foreign debt and a current account deficit running at 6% of GDP despite the best terms of trade in 50 years.

The contrast with News Ltd’s Terry McCrann was stark indeed as the bearded burbler was exceedingly bullish about our prospects this morning:

When I look across the entire business landscape I see companies in astonishing good health, succeeding directly or indirectly in the open global market place. The corporate sector looks much better than it did in other rocky times. It looks much better as a whole than its peers in any other major industrial country.

This is an absolute crock. Hewlett Packard shares soared 7% last night after a cracking profit and is now capitalised at $US121 billion. Australia doesn’t even have an IT company in the top 150 which McCrann says is the world’s best.

Many of our world beaters – such as Centro and ABC Learning – are over-geared and underperforming.

Too many of our big companies are not global players like Nokia, Google or Sony, but instead part of our internal service sector oligopoly. You know the types – big banks, the supermarket duopoly and the world’s most integrated western world telco, Telstra.

Leighton is German-controlled, News Corp is an American company that has added little value since 1987, James Hardie disgraced Australia and Qantas is part of that large club which makes money courtesy of government-largesse and excessive market power.

McCrann should have mentioned Macquarie Bank, QBE, Cochlear and Computershare. He should also mention our staggering levels of foreign ownership, on top of all that foreign debt.

I reckon the five biggest foreign investors in Australia are as follows:

If our corporates owned some of the prize mining and energy assets snaffled by this club, then McCrann’s claim might have some more credibility.

The full foreign ownership lists are packaged up here. 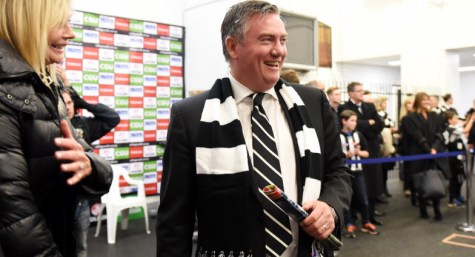 Kohler looks decideldy more unhappier by the day (is he losing money) & McCrann wouldn’t be allowed to say anything would he. Things are pretty good as long as you haven’t got loads of debt. Lazy balance sheets might come back in vogue.