Talkback is another world. The real one.

ABC Newcastle 10:35 AM: Caller Dennis explains why he disagrees with the apology saying people in Australia should be called Australians regardless of who they are.

2GB Sydney 10:29 AM: Caller Paul says that Federal Opposition Leader Brendan Nelson’s speech was good and it focused on the future. Hadley says he doesn’t want to get into a debate over whose apology speech was better.

ABC New England 10:29 AM: Caller Paul believes Federal Opposition Leader Kevin Rudd was grandstanding and some of the goals he was setting will come back and haunt him. Paul feels the Aboriginal people present have prejudged Brendan Nelson.

ABC North Coast NSW 10:28 AM: Caller Shirley praises Prime Minister Kevin Rudd for his words in the apology to the stolen generation. She also says the issue of compensation is a British Government problem and they should consider it.

2GB Sydney 10:15 AM: Caller Joan listened to Prime Minister Kevin Rudd speech and says that the wrongful removal of white children also happened and an apology should be made to them too.

ABC 936 Hobart 10:11 AM: Caller Don says he thought that the apology to the Indigenous people in Fed Parliament was marvellous. He adds that he liked seeing both sides of Parliament united.

3AW Melbourne 10:11 AM: Caller Rebecca says she would like to hear what people from the Stolen Generations thought of the apology because the protesters at Federation Square were very rude.

ABC 936 Hobart 10:09 AM: Caller Bernie says he wants to know when one will apologise to Ten-Pound Poms now that someone has said sorry to Aboriginal people.

HEART FM Hobart 09:56 AM: Caller Alana is shocked and appalled to hear that people are against the Stolen Generation apology. She says they are indicative of the generation that is selfish as they have all the knowledge and power to fix problems but we choose not to.

2UE Sydney 09:51 AM: Caller Michael wonders whether the apology to Indigenous Australians will improve Indigenous living standards. Host Steve Price says the NT Indigenous Intervention was necessary but there are also white parents who are negligent towards their children.

HEART FM Hobart 09:44 AM: Caller Ron says white man and the Aboriginal men will never assimilate, like in the north of America. As the white man made the farming lands Ron is looking at now. Ron says an Aboriginal burned an Australian flag that soldiers fought under.

3AW Melbourne 09:37 AM:  Caller Keith says the Stolen Generations apology by Prime Minister Kevin Rudd was rushed and tainted by his own political attack on the previous Howard Government.

2UE Sydney 09:37 AM: Caller Helen doesn’t agree with the apology to the Stolen Generations because Governments shouldn’t apologise every time there is a bad law. Says she has Aboriginal friends but says there are Aboriginal people out there that, no matter what you do for them, are never happy.

2SM Sydney 09:32 AM: Caller Ray says the bicentennial of Aust was the best thing he has seen since coming to this country, and the second best thing has been Kevin Rudd, PM’s apology today to the stolen generations.

HEART FM Hobart 09:27 AM: Caller Jodie says she is totally against the apology to the Indigenous people. She asserts that her home town of Shepparton, Victoria, is a great example of multiculturalism. She wonders how many times apologies will have to be made. She complains that primary school children are being shown the apology even though they may not fully understand it.

2UE Sydney 09:16 AM:  Caller Debbie doesn’t believe in the apology to the Stolen Generations because there is no apology to non-Indigenous Australians who have been s-xually abused.

3AW Melbourne 08:58 AM: Caller Patricia totally agrees with Mitchell on the apology to the Stolen Generation, saying ‘we have spent millions on the Aboriginals’ and wonders if Indigenous people will apologise for pulling down houses to use for firewood.

2GB Sydney 08:58 AM: Caller, Jay says there was pain and suffering on both sides, as with any country that has experienced invasion and war. He says there are Australians who equally deserve an apology who are not getting it who must feel betrayed.

2UE Sydney 08:37 AM: Caller Rashi believes that the apology to the Indigenous people is not sincere. She says if she were an Aboriginal person she would be sad. She does not like the ‘media hype’.

2CC Canberra 08:34 AM: Caller Bev does not want sorry said on her behalf. She believes the children were not stolen, but rescued.

FOX FM (Melbourne) 06:56 AM: Caller Lisa says there should only be an apology to indigenous Australians who were stolen.

The sorry saga of reconciliation 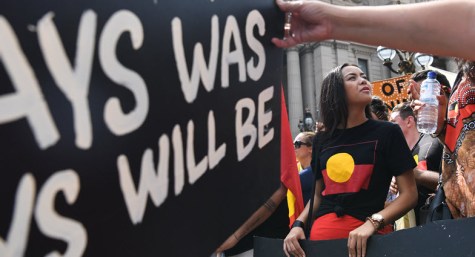 Does Caller James who thought it disgraceful that some indiginous Australians turned their backs on Nelso, also think it disgraceful for some elected members of parliament to stay away altogether, or to absent themselves when Rudd was speaking?

David, I agree. Some cringe worthy responses in there.

Reading some of those statements left me sad and ashamed….

Its very sad to hear these ignorant & heartless responses. Like Andrew, I wonder what sort of person can be angered by an apology to a people who have lost so much. To say others had it tough too is to ignore what it means to lose one’s culture & identity

How about a listing of those of us who voted with our feet and gathered in public places in our thousands to mark the apology. T