If Victorian water authorities and the state Treasury get their way, financial support for household water saving and water conservation initiatives may be diverted into supporting Victoria’s proposed desalination scheme, writes Peter Heininger.

If Victorian water authorities and the state Treasury get their way, financial support for household water saving and water conservation initiatives may be diverted into supporting Victoria’s proposed desalination scheme.

Following a series of secretive discussions, a decision is expected soon, before the new Federal Labor Government’s water resources minister will be in a position to respond.

What’s more, it’s believed that other state governments will follow suit, reducing or removing support for water conservation measures to increase water demands and associated revenue to repay debt incurred installing desal plants. It may also be the case in at least one northern state water conservation would be discouraged to increase water demand and therefore wastewater discharges that can be used to top up dams.

Such a move would enable water authorities to maintain their monopoly over water storage and distribution, while allowing state Treasuries to continue drawing billions of dollars of annual revenue from the sale of mains water.

The argument from water authorities is that nothing short of their strict monopoly control of water storage and distribution will work – and desal plants plugged into their centralised systems will ensure this monopoly control continues.

According to the Prime Minister’s Science, Engineering and Innovation Council Working Group on Water for Cities, as much as $30 billion has been earmarked for Australia’s various desal projects in coming years.

However, one Council member (who has also advised major industry groups, and various state government departments and officials) says we can expect the final bill for desal plants and associated infrastructure to more than triple over the next 10 years – hence the need to divert as much financial support as possible into desal.

A move to back desal to the exclusion of all other water conservation measures would also run counter to previous Victorian Government commitments that future water management policy would help underpin industry and manufacturing efforts.

The Council member says that if it proceeds, the move will undo more than a decade’s hard work in establishing water saving and industry initiatives.

A multimillion dollar industry is emerging around business innovation that now provides a range of water conservation products. This new set of industries is threatened, with as many as 30 Victorian and national businesses facing severe financial stress if all water funding support goes to desal.

Some of these smaller businesses may even go to the wall if financial support for their efforts is withdrawn. Many have geared their manufacturing and business around a series of decentralised water-saving initiatives, and these stand to disappear in an instant, the council member says.

If desal is supported to the exclusion of all other water-saving measures, we can expect everything from water rebates for rainwater tanks and water saving devices to State financial support for water sensitive urban design to virtually disappear overnight.

Regulating the lobbyists? Where would you draw the line?

No end in sight for toxic landfill in Victoria 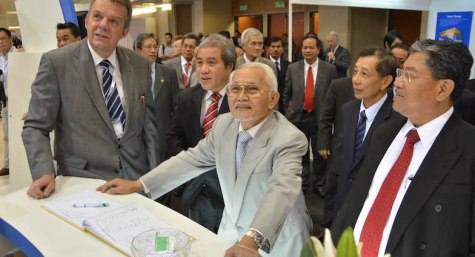