Data from last year’s Australian census continues to come on stream, some of it in ways to attract the interest of election watchers. Yesterday the Parliamentary Library released a research paper matching census data with the new federal electorate boundaries, and it carries an important message about trends in political behavior.

During the Howard years, there has been a realignment in progress.

Although Labor’s vote is still heavily based in the working class, there is another pattern at work: the better-educated voters are moving towards Labor, and the less educated are moving away. It is the same pattern seen in the “Yes” vote in the republic referendum of 1999. (Incidentally, there’s nothing unique about Australia in this respect – the same realignment is going on even more clearly in the United States.)

Take table 35b, ranking electorates by the proportion of over-15s who never advanced beyond year 10. Of the 25 lowest, representing roughly the most educated areas, Labor recorded a better than average swing in 2004 in 23 of them. That’s an even better correlation than proportion of people paying mortgages (table 41b), which shows a similar pattern.

The best indicators of Labor voting are still class and ethnicity – for example, proportion speaking a language other than English at home (table 22b), which shows that 19 of the top seats are Labor-held (the exception, interestingly, is John Howard’s Bennelong). But for a predictor of recent swing, level of education seems to be the place to look.

In today’s Australian George Megalogenis picks up on this trend, saying “The latest data shows that Labor can’t win unless it recovers some of the blue-collar seats that defined it in its former glory days”, and “The less-educated marginals loom as the game breaker.”

But that forgets the most important lesson of the pendulum: if the swing is on, seats will fall. The pattern might be surprising, but deviations from uniformity will approximately cancel out.

Look again at table 35b, showing level of education. It’s true that several of the marginals Labor expects to win are at the less-educated end. But not disproportionately so: of the 15 most marginal Coalition seats, nine are in the better-educated half of the list. And if the swing is again less than average at one end, it will be higher than average somewhere else.

Dobell, Page, Hinkler and Bass might fall short, but Deakin, Sturt, La Trobe and Ryan might come Labor’s way instead.

As Peter Brent said yesterday, “No seat is ‘must win’.”

Ninemsn calls it – seat by seat for Rudd

Richardson: Punters go for Labor on the bigger picture 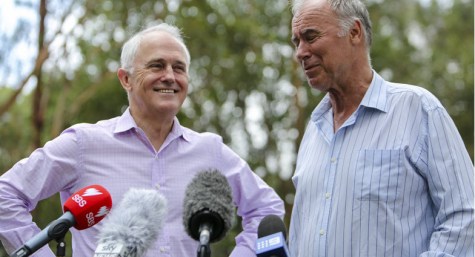