As General Petraeus presents his entry for the Pulitzer Prize in fiction in Washington, and Afghanistan quietly goes to pieces, attention has switched away from Pakistan for a couple of days, the state that should really have everyone shopping for brown underwear.

The post shock and awe Middle East/central Asia region is like one of those old vaudeville plates-spinning-on-sticks acts, with the hapless carny running between them, shaking the dowling in the hope of keeping them up for a few seconds longer.

So as General Petraeus presents his entry for the Pulitzer Prize in fiction in Washington, and Afghanistan quietly goes to pieces, attention has switched away from Pakistan for a couple of days, the state that should really have everyone shopping for brown underwear.

The recent re-exile of Nawaz Sharif — after seven years away, he was in the country for mere hours before being sent out again — is the last, inexplicable, moment people have seen of the country in the news, but what it really means is that the legitimacy of the Pakistani political framework is collapsing.

Two days after Sharif was exiled, leader of the Tehreek-e-Insaf party (Movement for Justice), former cricketer Imran Khan, was prevented from visiting Karachi by local police, loyal to president Musharraf of whom Khan is highly critical.

If the spectacle of national politicians having no real sway in regions run by local uniformed gangs sound familiar, it is of course because Pakistan, though more religiously (though not ethnically) homogenous, is no less a confection of power and politics than is/was Iraq. Indeed the Northern provinces aren’t officially fully part of Pakistan — they have a weird autonomous status that was the price of their being joined to the country in any way at all.

Indeed, the country’s status is the greatest single measure of the cant and hypocrisy that constitutes the “war on terror”. If a dirty bomb does hollow out a western city sometime in the future, it will be from material and expertise supplied by Pakistan government scientist AQ Khan. Yet the coalition of the willing has simply put it in the too-hard basket, preferring to go up against states which (ostensibly) posed no real threat of defeat, like, erm, Iraq.

The problem for Pakistan is that it is a bankrupt state and has been for some time, allowing the social framework to fall away in order to keep up a crippling arms race with India. Thus, the state education system has largely collapsed. What fills the gap? Madrassas, the good, the bad and the otherwise. Here more than anywhere, religion becomes the hope of those who have lost any in the depredations of a corrupt elite — most particularly the underdevelopment in the IMF’s “restructuring” years.

Should a radical movement take over the country, they will have an actual bona-fide force de frappe – not a “two bombs in five years” one like Iran.

That couldn’t happen could it? It’s just a few stories about some extremists blowing up Buddha statues. Like in that other place, what was it called… Afghanistan? 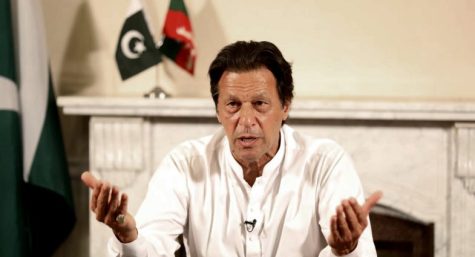