Law of the gun at work in Burringurrah

Burringurrah Community is experiencing its own mini APEC courtesy of WA ''security forces'' as I write.

Burringurrah Community is experiencing its own mini APEC courtesy of WA ”security forces” as I write.

Burringurrah, a remote Aboriginal community of 50 houses 500 kms east of Carnarvon, is experiencing the ‘most interesting’ week in the 25 years since it was established by the traditional custodians of WA’s nearby iconic Mt Augustus.

On the weekend (Saturday night) a mentally unstable whitefella who is a frequent visitor to the community fired shots at a group of the local youth. One of the custodians nephews was shot twice in the back. The shooter then disappeared into the bush.

The police, based in Carnarvon 500 kms away were contacted. Local police drove out about Monday to the nearby Mt Augustus resort and instructed the proprietors to keep their presence a secret. They waited until Tuesday when the Tactical Response Group flew into from Perth, three days after the community requested immediate assistance.

The Tactical Response Group has been roaming around the community fully armed pointing automatic weapons at community members. Like every community there are kids everywhere on the streets. The swimming pool manager’s house was surrounded and he was told to ”come out with your hands up” at gunpoint. The community was instructed not to talk to Karratha based ABC radio when they contacted the community about the shooting incident yesterday

It seems the victims of this crime have now become the victims of police. The community is very upset that the Police are not searching for the perpetrator who is still hiding somewhere in the bush posing a risk for the community, the increasing numbers of tourists travelling on these outback roads, and given his mental condition and the fact he has a weapon himself.

The community instead seems to become a victim of the general hysteria and fear of otherness (refugees, protestors, Aboriginals) infecting European Australia and in particular our ‘security forces’. Burringurrah community has been often cited as a hotbed of child abuse by the authorities Police and Department of Community Development. Yes there have been cases, and the culprits were charged and convicted a couple of years ago. No other allegations have been made since. There may be some unlicensed weapons in the community but there are proper procedures for dealing with these. The police are soon to have a Station built in Burringurrah. One wonders how relations will be and how it will function given this us and them approach.

No European Australian populace would tolerate being put under an armed siege and have automatic weapons pointed at them in response to an outsider shooting at their kids. However, it seems that there is a mentality still making it acceptable to do this to an Aboriginal community especially after the events in Northern Australia. 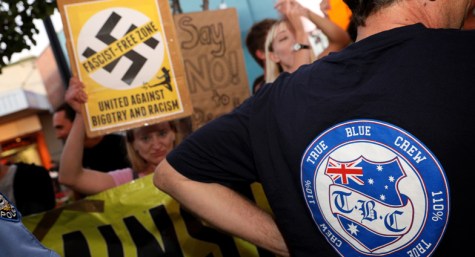 Are far-right nationalists taking it upon themselves to provide ‘security’ for Pauline Hanson?

The saga of Jack Quigley’s arrest

On questioning the “viability” of remote Aboriginal settlements