Are The Sydney Morning Herald tearing their hair out this morning after being scooped on the Rudd stripper story? Can't imagine The SMH are laughing too hard, writes Sophie Black.

Are The Sydney Morning Herald tearing their hair out this morning after being scooped on the Rudd stripper story?

On Friday the 22nd June Crikey published this anonymous tip:

This report came (to me from a reliable source) allegedly from within The SMH. It suggests that on the day Howard announces the election, an SMH reporter will publish a story about Rudd which, it is claimed, would blow him out of the water. Apparently, the Rudd team is using every means to block it, but it is claimed the reporter is adamant that he will proceed, but only on the day the election is announced. Whilst intriguing, it worries me that a respected newspaper could contemplate interfering in the political process by sitting on a story until the point when it could achieve maximum damage.

In relation to the rumour Friday’s “Tips and Rumours”, I am the spouse of an SMH journo and am aware of an unflattering story about Kevin Rudd that is soon to be printed, but have not heard that it is deliberately going to be held over to the announcement of election day. I understand that it is due to run in the next week or so. As to how damaging the story is, whilst it does not portray Mr Rudd in a favourable light I’d say it is no more damaging than stories that have already come to light such as the not-so-stolen “stolen” notes on productivity, the gaffe on productivity itself, associating with Brian Burke (massive hype – no damage), embellishing the childhood “eviction” story or the Dawn Service in Vietnam incident. None of these incidents has had any impact on Mr Rudd. The story I am aware of is no more controversial than any of these.

This morning Phil Coorey, political correspondent from The Sydney Morning Herald had this to say on ABC radio:

….let’s remember this was four years old, it had been known about, I think even at The Herald. I knew when I was in New York that Rudd had gone to Scores but at the time it was completely unremarkable. But I did mention it to a feature writer in our paper who was doing a profile on Rudd back in April and I can’t even remember if it ran in that feature or not…

“Isn’t news funny?” responds the ABC’s Marius Benson, “It’s all in the presentation isn’t it?”

Can’t imagine The SMH are laughing too hard.

Either Glenn Milne went where The SMH feared to tread or the paper sat on a headline that contained the words “Rudd” and “Strippers”, it got scooped, and now it’s spitting chips.

Bias in action: how the broadsheets covered IR

Reality check: Talking and walking heads to the tune of Benny Hill 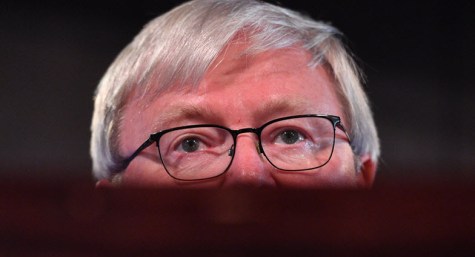 Kevin Rudd wants you to know he is extremely cranky