Wow, when things hit critical mass these days, they really do it bigtime. Halfway in and there doesn't seem much doubt that 2007 is going to be the year of Facebook.

Wow, when things hit critical mass these days, they really do it bigtime. Halfway in and there doesn’t seem much doubt that 2007 is going to be the year of Facebook.

Though as noticed yesterday, the site has only – only – 30 million members, compared to MySpace’s 200 million, the latter seems almost absent from the field. In the internet caffs, in your inbox, in the mainstream media, it’s all Facebook. Why the sudden take-off?

The obvious answer lies in its significant structural differences to MySpace, a site which was launched towards the end of the blogging era, and bears its marks.

Facebook by contrast emphasises social networking – the essence of Facebook is not so much as a place to tell the world what you think of the latest Bourne Identity film yada yada, but substantially to connect with others, find lost contacts and be continually updated on the doings of friends.

Two things are significant in this process. The first is that the process occurs semi-autonomously – sign up for facebook, and the software can immediately connect to all the names in your email address book.

The network is building itself, with you as the carrier. When you receive an email saying you’ve been ‘poked’ by someone, your implicit human bias towards reciprocity – to smile when smiled at, to mimic, mirror and compliment the behaviour of others – kicks in.

The second important point is that the rise of such networking websites changes, or expands, the very meaning of the word ‘friends’. For very obviously, all the people listed on your SN site as ‘friends’ aren’t that in the sense we now know it – of another person having the status which has some claim on your loyalties, obligations, etc.

Will that change the whole idea of friendship more generally? Does it reflect a real change in such? We will find out, as social networking waxes and wanes. Like blogging, it relies on the illusion of ‘broadcasting’ – that the stray remarks you make in the pub or wherever, as part of conversation, will actually be interesting if you put them online and say them to no-one in particular.

After the novelty of having 900 ‘friends’ wears off, people will find that, though useful, social networking is cold and non-reciprocal, the measure of an atomised society rather than the answer to it. 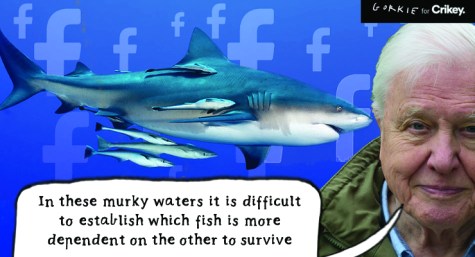 Why MySpace for grown-ups won’t fly