Nine enters the property market. Crikey reported late last year that Nine was looking at selling Bendigo Street, Richmond, its Melbourne HQ since 1956 and moving to city offices, much the way the Ten Network had done in moving to the Como centre in South Yarra. Nine was also exploring the future of the Willoughby site in Sydney, which is complicated by the giant broadcast tower next to it and continuing worries about electromagnetic radiation. The story surfaced again late last week. Now Nine has to sell Willoughby and Richmond to raise the estimated $100 million to move to full digital TV broadcasting. Seven has moved there and Ten isn’t far behind. Nine has a lot of ground to make up but it knows there will be cost savings when it does. If you thought last year’s retrenchments were tough, just wait until Nine goes digital. — Glenn Dyer

In the morning. With the new Nine network program The Catch-Up due to hit our screens in just under a fortnight’s time, it will be in the hunt for advertising already dominated by Nine’s Morning’s With Kerry Anne (Kennerley) and 9am With David and Kim on Ten. KAK was by far the most popular program in the morning battle, averaging from between 153,000 for the two hours from 9am to 11am to a high of 185,000 in the five major survey periods last year. The Ten program’s ratings ranged from a low at the start of the year in first survey of 101,000, to a high at the end of the year of 121,000. The program continued in December with reworked ‘specials’ and returned early last month and had viewing levels above that. KAK started yesterday and averaged a handy 146,000 while Ten’s program averaged 125,000 viewers. KAK‘s program dominated the advertising side with an estimated $18 million a year; Ten is around $10 to $12 million. Now The Catch-Up will be pitched into the battle for that money: the advertising available when it is going to be on air, between 1pm and 2pm doesn’t match that at 9am simply because the 9am programs are advertorial-driven and the advertisers pay to provide their own content. The Catch-Up is going to be advertorial free (from what has been said in public) so it will have to lift viewing levels to drive ad rates higher. And the KAK show stands to be the loser, not Ten or Seven. — Glenn Dyer

Last night’s TV ratings
The Winners: A big night and one which the Nine Network won’t take much heart from. It was also a night where the first signs of a public switch off of game shows appeared…all so soon for Nine and Seven? All networks will take heart from last night: Ten because The Biggest Loser did very well, Nine because it was competitive, Seven because it won. Starting with Today Tonight, 2.024 million, with Seven News second with 1.584 million. Desperate Housewives was third with 1.567 million, 1 vs 100 was 4th with 1.344 million, Nine News was next with 1.296 million, Home And Away was 6th with 1.251 million, just in front of Ten’s The Biggest Loser, 1.204 million (it was an elimination); Brothers and Sisters on Seven at 9.30pm, down to just 1.192 million, The Rich List with 1.67 million (also Seven and also down noticeably), Bondi Rescue at 8 pm on Ten, 1.167 million (up), Motorway Patrol on Nine at 8 pm, was higher at 1.132 million; A Current Affair down at 1.112 million and The Code at 7.30 pm, added 68,000 viewers to 1.069 million people. A total of 14 programs with a million or more viewers on the first full night of 2007 ratings. Without the huge audience gain for TT it probably would have been a closer night between Seven and Nine.

Glenn Dyer’s comments: Viewers dropped off Brothers and Sisters last night by around 240,000 or so. Understandable perhaps. They weren’t watching A Difference of Opinion on the ABC. But the interesting point from last night was another loss of audience by Eddie on 1 vs 100 (Housewives picked up a few thousand). Eddie shed another 84,000 viewers. Remember his opening audience was 1.958 million. The Rich List also shed audience on Seven, losing around 230,000. Are viewers getting bored with the idea already? Surely not. For Nine’s sake, hope not, so much money and ego tied up in Eddie’s vehicle. Ten’s The Con Test is back tomorrow night. That will be watched to see if there’s any loss of audience. Last night though was notable for three top class examples of TV journalism. The TT interview with Jodi Power, the friend of Schapelle and Mercedes Corby. Paid for I know but stunning nevertheless. Liz Jackson’s report on the Victorian Police Union was superb in its own way. It was as though the Queensland Police culture from The Moonlight State had uprooted itself and moved to Melbourne and the Jacob Kovco story on Australian Story was equally superb and should have been seen by a bigger audience. Tonight it’s a Dancing movie on Seven (keep the seat warm for Dancing With The Stars) and All Saints returning at 9.40; Ten has NCIS, and TBL and Nine has a new 20 to 1 at 7.30, a repeat of CSI and then the about to die Justice. Possibly Nine. And the ABC has more Grumps at 8pm. Foreign Correspondent returns at 9.20pm. 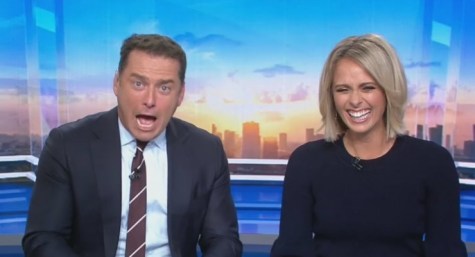 The sun may be setting once again on Today