Crikey has obtained previously unreleased copies of internal reports that give a damning indication of the poisonous culture within the NSW police force.

A series of previously unpublished and highly confidential audit reports obtained by Crikey reveal an alarming picture of mismanagement, harassment and possible corruption within the most senior ranks of the NSW Police Force.

As reports surfaced yesterday of NSW police pushing out new recruits to boost police numbers ahead of the March state election, the documents seen by Crikey centre on the Goulburn Police Academy and contain complaints against the now Assistant Commissioner Reg Mahoney concerning allegations of conflict of interest, bullying and mismanagement.

One of the signatories to that letter, former NSW police officer Richard McDonald, was one of the nine former NSW police officers who gave evidence before the Brownyn Bishop Inquiry back in 2003. McDonald told Crikey that the same charges of nepotism, incompetence, corruption, bullying and cronyism discussed then will continue to crop up within the NSW force until the senior ranks are examined.

McDonald told Crikey that since giving damning evidence to the inquiry in 2003, not a single recommendation or allegation has been acted on. The outraged response around a story about police s-xual harassment last week followed the same old script – Police Commissioner Ken Moroney promised to investigate the allegations, but the story petered out without a single head rolling.

“Moroney has a history of allowing senior police to escape the consequences of their actions. He needs to be held to account…,” says McDonald.

Mr Moroney might care to dust off the reports prepared by Inspector RE Mawdsley, or former special crime and internal affairs commander Mal Brammer…into the Police Academy’s bar and police shop, and read their collected findings and recommendations before expressing surprise that things are not all hunky dory at Goulburn.

Crikey has dusted off the previously unreleased reports to save Moroney the trouble. They contain a litany of problems at the Academy under the now Assistant Commissioner Reg Mahoney, who was then principal of the academy. The documents from 2000 provide a damning indictment of the then Chief Superintendent and Principal of the Goulburn NSW police academy Reg Mahoney’s management style and his close relationship with Commissioner Ken Moroney.

This is how Mahoney, last year’s recipient of the Australian Police medal at the Australia Day Honours (he was nominated by Ken Moroney), is described in the 2000 auditor’s report:

Internal affairs found that there should be close monitoring by regional commanders of all his future applications for promotion.

A progress report by the auditor offers a hint as to why the recommendations weren’t acted upon:

There is a consensus of opinion that Headquarters is aware of the serious problems at the Academy particularly relating to the Principal’s performance (Mahoney). However there has been little action to address the issues. The Principal’s ‘high ranking’ connections are sighted as a reason as the inaction.

Crikey understands that after Mahoney left the Academy he was demoted two ranks to Chief Inspector and given control of a Local Area Command, Miranda. But within two years he was promoted to Assistant Commissioner rank, and now holds the position of Assistant Commissioner at the Commissioners Inspectorate (the body that once found him wanting and in need of ethics training).

And it seems the favourable treatment to Reg Mahoney has also extended to his son-in-law, Sgt Damien Goodfellow. The 31-year-old detective – who is married to the daughter of Assistant Commissioner Mahoney – has twice beaten recommendations he be sacked for criminal convictions for assault and drink driving . According to the Sun Herald, Police Commissioner Ken Moroney delivered a speech at Detective Goodfellow’s wedding.

Without a serious examination of the senior ranks of the NSW Police force, this script isn’t set to change any time soon.

Former NSW Police Commissioner back on the beat 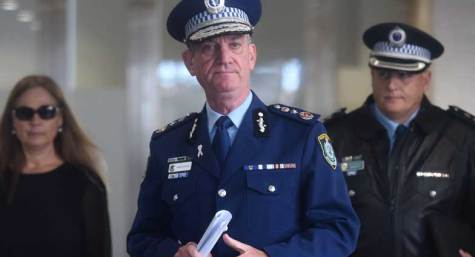