On the ground at the G20 protests

The fact that the Red Army didn't storm the Hyatt and bring Peter Costello's head out on a pike had less to do with flawless policing and more to do with a largely benign and disorganised crowd.

Halfway through the riot I began to worry that I’d never be able to write about it. It’s not that I thought I was going to die out there on Russell Street – it’s just that the protest was quite lame. My fears were averted some hours later when I picked up the first editions to see that there had actually been total chaos on the streets as warriors of hate chased their slice of infamy.

The Herald managed to stretch the single exciting incident of an innocent divvie van having its windows knocked out across six pages. The Age had it on the front page. When I tried to take a photo I got a baton in the guts.

According to the Sun-Herald, we marched from the State Library up to Russell Street where a tense 15 minute stand-off ensued, then fled around the corner to converge on the police cordon from Collins Street.

I don’t remember a tense stand-off, though I do recall standing around looking suave while some people drummed and chanted. “Do you want us to take over so you can have a bit of a rest?,” I asked a friendly officer. He assured me that the current set-up would suffice.

We then ambled nonchalantly around to Collins Street to see how the State-smashing was progressing there – ballerinas were dancing to NWA. On the corner of Flinders Lane and Exhibition the aforementioned truck was moved back down the lane, looking decidedly worse for wear.

The mother of a toddler asked the riot squad if they would hurt her child. “It’s your f-cking choice, lady” explained a helpful officer. She remarked that all involved had a choice, but decided to retreat with child to safer ground. We had a chat with one of the riot squad about whether he was being paid extra for donning all the gear. He wasn’t, but still didn’t feel it was appropriate to join the protest.

The police retreated down the lane. Some young ruffians remarked upon the shades of defunct currencies and one bloke was arrested when he scaled a fence for reasons unknown. One of us got a bloody nose when pushed into police by snappers and we decided to head back up to Collins Street. Our path was blocked by another line. “Can we come through?” asked one scallywag. We were told to exit at Flinders Street. “That’s a long way,” I interjected, “You need to understand that as protesters we are inherently lazy.”

Moments later bottles began to smash around us and we decided to leave. Our path was blocked by more riot police who had made a new line behind us. I was told to “GET BACK!” “They said we had to come through here,” I informed him. “F-ck off,” he replied. About an hour after The Age reported the protest was broken up, we headed home.
All in all, Christine Nixon’s professional agitators from Europe didn’t do a very good job and the sinister anarchist cabal who funded their airfares should demand their money back. The opportunity for real chaos was present but not exploited – the police constantly left large gaps in their lines and were surprised on a number of occasions to find people on the wrong side of them: on one occasion naive pedestrians wandered up an alley and had been standing outside the “secret” command central for a while when they were finally noticed.  No apparent plan was in place in the event that the protesters turned heel and began to smash up the Bourke Street Mall (where shopping continued unabated), nor was anyone posted in the empty Collins Street Plaza, the perfect location for serious rioters to take the back of two of the police lines by complete surprise. The fact that the Red Army didn’t storm the Hyatt and bring Peter Costello’s head out on a pike had less to do with flawless policing and more to do with a largely benign and disorganised crowd. 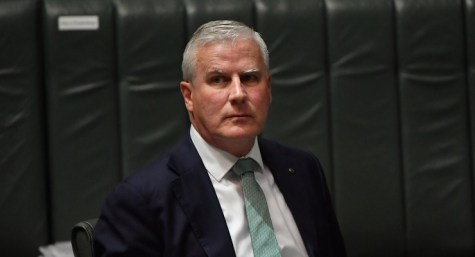 In defence of Michael McCormack: there is no ‘good’ violence