Ruddy’s bl@#!dy painting worth a motza

I am looking for a milliner who will make me an edible hat. Two months ago I accused Sotheby’s of having a “ruddy cheek” for putting a six-figure estimate on an Archibald-winning portrait of actor David Gulpilil.  I described as “astounding, even absurd” the auction house’s estimate of between $150,000 to $200,000 when it announced in June that it would be auctioning the portrait by Sydney artist Craig Ruddy. At the time, I told Sotheby’s PR flack that I would eat my hat if the picture got even close to $150,000.  Could someone please pass the hat, and the salt.  Last night, Ruddy’s bl@#!dy painting sold to an anonymous Sydney collector for $312,000. This is more than 30 times the highest amount the artist has previously received for any one of his works. Until he won the 2004 Archibald prize, Craig Ruddy was a virtual unknown in the art world. And his name only stayed in the spotlight thanks to a celebrated court case in which another Sydney artist challenged the awarding of the prize to Ruddy on the grounds that the Gulpilil portrait was a drawing and not a painting. The case was thrown out in June and within a fortnight Sotheby’s announced it had won the right to flog it at auction. Unusually for an auction, the artist was the vendor, so it represents a huge windfall for Ruddy. To his credit, he intends to give 20% of the money to an Aboriginal charity.
This is a stunning victory for Sotheby’s and is testament to the importance of hype and notoriety in the art market. It’s the highest price ever paid for an Archibald-winning portrait, breaking the record set in 1998 when William Dobell’s portrait of Joshua Smith, painted in 1943, sold for $222,500. While I’ll happily swallow a sombrero over the price achieved last night, I stand by my assertion that it was ridiculous for Sotheby’s to compare Ruddy’s portrait of Gulpilil to previous Archibald winners such as Dobell’s portrait of Smith, Clifton Pugh’s portrait of Gough Whitlam or Brett Whiteley’s self portrait. There is a yawning gulf between Ruddy and those other artists in terms of talent, and no amount of hype or money is going to change that.
Speaking of Whiteley, he also achieved a record at last night’s Sotheby’s sale in Sydney, with his 1988 Frangipani and Hummingbird selling for $2.04 million, the highest price ever paid for one of the late artist’s works. In my view the four-metre wide still life is Whiteley at his overblown and showy worst. But being overblown and showy doesn’t seem to deter for the kind of people who have more than $2 million to spend on a picture. 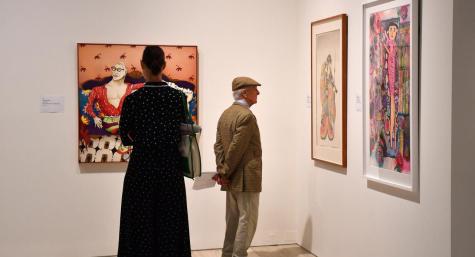