Ease the squeeze or hoax the folks

Christian Kerr writes: Tony Abbott’s popped up in print with a peculiar piece in The SMH today: Full marks to Malcolm Turnbull for responding promptly, even playfully, to the 58-year-old childless lesbian poet who complained “there is nothing in the budget for me”. She will certainly enjoy the benefit of the across-the-board tax cuts. Still, […]

Tony Abbott’s popped up in print with a peculiar piece in The SMH today:

Full marks to Malcolm Turnbull for responding promptly, even playfully, to the 58-year-old childless lesbian poet who complained “there is nothing in the budget for me”. She will certainly enjoy the benefit of the across-the-board tax cuts. Still, she was onto something. John Howard has never set out to court the inner-city vote just as he’s never really sought the endorsement of economists, either. Perhaps this is why the Herald and The Australian Financial Review gave an otherwise very well-received budget its most critical reception…

He then goes on to defend social engineering in favour of families with children – a little outside the Health portfolio and somewhat far removed from John Howard’s 1996 commitment to govern “for all of us” – before admitting that tax reform is just too hard:

The budget delivered tax reform, but not the reform most economists want. They want a conceptually elegant tax-transfer system where people don’t pay tax while they’re also receiving benefits. This is indeed an important public policy goal but it’s not as important as a fair go for families with children. Also, it’s very hard to achieve without undermining the revenue base or creating large categories of losers as well as winners.

Is this some devilish plot? Have the Health Minister deliver the news?

Well, it comes on top of yet another warning – this time from Access Economics’ Chris Richardson – that Australians are spending more than they earn.

Richardson adds that the tax cuts announced in the federal Budget have created little advantage for Australians in light of the interest-rate rise. “The Government should have considered further tax reforms for either end of the income scale to improve efficiency.”

Well, he’s one of those economists. He would say that, wouldn’t he, Tony Abbott would probably say. And Ross Gittins is even worse. He’s economics editor of The SMH. Yet his comments are worth noting, too:

What a strange thing to happen. Peter Costello delivers a giveaway budget with the biggest tax cuts in ages and it does nothing to lift the Government’s standing in the polls.

According to the Herald/ACNielsen poll, only 43 per cent of respondents say the budget will make them better off, even though 52 per cent say the budget is good for the country.

And two-thirds say that, rather than a tax cut, they would have preferred increased government spending on services such as health.

How could such a generous budget – a product of the Government’s overflowing coffers – be so ungratefully received?

My best explanation is that the budget’s generosity was aimed at high-income earners, not ordinary voters. And most people quickly realised there wasn’t a lot in the budget for them…

The mortgage, petrol, childcare – it all costs too much. There’s nothing left. We have to put our consumer goodies on the credit card and hope the government will pick up a few of the bills.

How do you fix this? Well, Gittins picks up on a paper published by the Committee for Economic Development of Australia, CEDA, entitled Tax Cuts for Growth by Nicholas Gruen – a name Crikey readers might recognised from his blogging efforts.

“Gruen finds little support for the belief that high tax rates discourage work effort by high earners,” Gittins writes. “After all, we know that it’s highly skilled and highly paid managers and professionals who are already working the longest hours. All the research evidence says it’s people at the bottom end of the income scale whose decisions about work are most affected by the tax rates they face. Tax rates particularly influence people with greater freedom to decide whether to work or not to work because they’re their family’s ‘secondary earner’ – usually mothers.”

Abbott does confess that tax reform matters. “Economists’ nagging is important because even the best governments can never rest on their laurels,” he says. But they do. His government in particular.

They don’t ease the squeeze. They hoax the folks. Rather embracing reform, John Howard plays political favourites – while Peter Costello rams the message home day in, day out that Labor simply can’t be trusted with the economy.

The polls dip. But they win elections. So Abbott can get away with his sermonising. 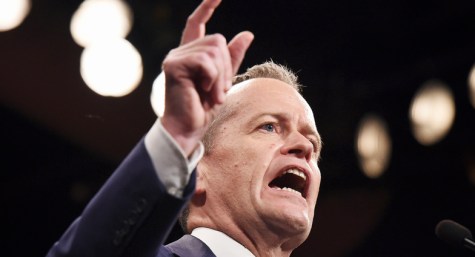 Budget 2013: what we know before the papers are delivered