Seven’s Dancing problem. Seven’s new show, It Takes Two (aka Singing With The Stars), was launched on the final of Dancing With The
Stars on Tuesday night but its birth hasn’t been without
trauma. It Takes Two is being produced by BBC Worldwide and Seven, with no outside
involvement. The BBC had licensed Dancing With The
Stars to Seven to Granada to produce here in
Australia. But now
it seems BBC Worldwide (and the BBC) and Seven are none
too pleased at Granada’s involvement in Nine’s Torvill and Dean Skating with the Stars
program. The BBC and Seven consider Nine’s format too close to that of
Dancing With The Stars. The BBC is not happy that the Torvill and Dean
program made by Granada turned up on commercial TV in the UK (on ITV)
and proceeded to do well. An
insider, when asked how upset BBC was with Granada, replied “very”. Seven
says it’s a matter for Granada and the BBC to sort out. The BBC used
Granada for
Dancing in its previous series and any decision on future deals will be up to
the BBC. It’s been a lucrative contract for
all concerned. As we saw with this week’s final, Dancing With
The Stars is huge and there appears to be the possibility the BBC might decide to go it alone with Seven, as they have done with It Takes
Two. Complicating matters for Seven
is that Granada (ITV) is the second largest shareholder in Seven, with around
11%. That
sort of stake helps relationships but doesn’t cement them if the format owner is
upset with the shareholder. Big
stakes for Granada: the decision to produce the Torvill and Dean effort for ITV and for Nine could prove costly. – Glenn Dyer

Last night’s TV
ratings
The Winners: Nine’s night thanks to The Footy Show ploy – a bit cynical, but
hey, it’s commercial TV and anything (well almost) is permitted in the
name of winning the eyeballs of viewers. And no-one knows that better
than “fast” Eddie McGuire, who hosted the charity gig at Beaconsfield
then announced that his comeback to the microphone was over and he was
retiring. Nine’s on-air effort will be all the poorer for it. Despite
the cynical viewer grab, Eddie did host well and carried himself
appropriately. But the two miners, Todd Russell and Brant Webb were his
equal and more in the dignity stakes. They are not going to be
pushovers. They obviously had a lot of time to think and talk about the
after life when down in the mine.There are lot of very experienced
people at Nine, Seven, Ten and the ABC who could have learned a lot
from Eddie’s efforts last night.The Footy Shows were number one with a
combined audience of 1.570 million, Seven’s Today Tonight was second
with 1.565 million, then Seven News with 1.500 million, then Nine’s
Missing Persons Unit returning with 1.488 million, Getaway with 1.413
million, Lost was 6th with 1.410 million (no more top spots),
Hello/Goodbye (debuting on Nine at 9pm ) with 1.394 million, Nine
News, 1.391 million was 8th, A Current Affair was 9th with 1.257
million. Seven’s Home and Away was 10th as was rival, Temptation on
Nine both with 1.210 million. Seven’s Las Vegas was next with 1.195
million, Big Brother was watched by 1.114 million (off a bit), Ten’s
Medium averaged 1.015 million and the 7pm ABC news averaged 1.002
million. Fifteen programs in all with more than a million viewers, so a
fairly even night’s viewing.

News & CA: Seven News won nationally as did Today Tonight. Nine
News and A Current Affair both won Melbourne because of the Eddie and
Beaconsfield influence. Melbourne, after all, is closer to northern Tasmania
than any other mainland capital and there’s the common bond of the AFL, which is
Eddie’s domain. But it seems that the further north and west you go the more it’s
“so what?” in the minds of viewers about Beaconsfield. It has lost its traction
in large parts of Australia. For that reason the reaction and audience size for
the Sunrise special edition program next Wednesday will be of considerable
interest. The story is dying and the longer it goes, the lower the value of any
payment.The 7.30 Report‘s Budget reply of Kim Beazley on ABC averaged 648,000,
naturally less than the Costello budget speech on Tuesday night. That anyone
watched Beazley is a tribute of the dullness of that timeslot on Thursday
nights. Nine News’s loss in Sydney and that of ACA would not have been welcomed
at Willoughby considering the good work Mark Ferguson (for the 6pm Nine News)
and Tracy Grimshaw (ACA) have been doing. She showed last night on The Footy
Show bit from Beaconsfield that she’s a sensitive
reporter.

Glenn Dyer’s comments:
A stunt by Nine made sure of the win on the night
and tonight it’s the real football with the AFL and the NRL games on Nine. The
Rugby League is a no interest trial game between City and Country sides for
the NSW State of Origin side for the first game on 24 May. So what more can be
said about The Footy Show? Both miners are good talent: they did OK on the
stage, they probably should have stayed away if they wanted to maximise the
revenue from their ordeal. I think they understood that drawback but wanted to
thank people in the most public way. As the audience figures for the show and
the news and ACA/TT showed, the further you are away from Melbourne-Tasmania,
the less interest there is. Eddie McGuire was good, but showed his cynicism
right at the end when he said goodbye to NRL Footy Show host, Paul ‘Fatty’
Vautin and said something along the lines of: “see you in Sydney tomorrow for
lunch”. That sort of put the whole event in some perspective: goodbye
Beaconsfield and the miners, hello Sydney and lunch (he does have the Richard
Carleton memorial service tonight in Sydney, which won’t be broadcast
live). 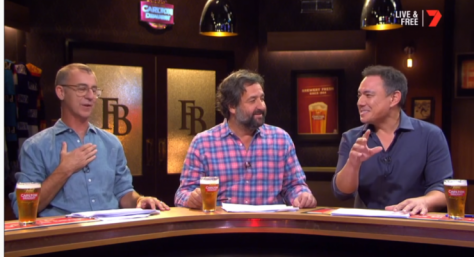