Telstra v Fairfax: the gloves are off

Crikey editor Misha Ketchell writes: For years, Telstra has been “a media player without a media mouthpiece,” says company spinner Rod Bruem. Not any more. Since Sol Trujillo arrived the phone company has been itching for fights for big opponents – with the government, with the ACCC and now with the Australian Financial Review. Telstra […]

For years, Telstra
has been “a media player without a media mouthpiece,” says company
spinner Rod Bruem. Not any more. Since Sol Trujillo arrived the phone
company has been itching for fights for big opponents – with the
government, with the ACCC and now with the Australian Financial Review.

Telstra management is apoplectic over Pamela Williams’ story in last Friday’s Fin (not online)which
alleged Trujillo has been stacking the company with mates and awarding
lucrative contracts to old contacts. It’s part of what Telstra sees as
jihad against the company led by Fin editor Glenn Burge – and this time they aren’t taking it lying down.

On the weekend Bruem posted this critique of the article on Telstra’s Now We’re Talking
website, in which he attempts to turn the tables on Fairfax by asking
16 pointed questions on topics such as whether Glenn Burge appointed
any former colleagues at the Fin Review and whether Fairfax’s own tendering procedures are transparent.

Bruem’s
questions are worth perusing for the myriad accusations they contain,
but his main argument is that Fairfax has been using the paper to
damage a competitor:

The biggest threat to Fairfax and its so-called “rivers of gold” classified advertising is Telstra and Sensis.

The
threat became serious when Sensis beat Fairfax in acquiring the Trading
Post business and the plan to merge Fairfax and Sensis hatched by
former leaders of both companies was rejected by the Telstra board.

It
became deadly serious when Sol Trujillo arrived and announced Sensis
would be the centrepiece of Telstra’s aggressive growth strategy.

While
the journalist Pam Williams put her name to this attack on Telstra,
Fairfax insiders tell me it was driven by people much higher up in the
company with an obvious agenda.

Of course we can’t name the insiders because they fear they’ll lose their jobs (- sound familiar Pam?)

This morning Fairfax spinner Bruce Wolpe declined to respond, firing back this response:

This is one of the most astonishing emails I have received in my corporate career, and I won’t be responding anytime soon.

Bruem is undeterred. Telstra is reviewing its sponsorship of the Financial Review’s
budget coverage on Wednesday. While it would “not be how we do
business” to pull out of the deal, says Bruem, it was “seriously
considered” on the weekend and the option has not been taken entirely
off the table.

And Bruem is going to keep pursuing Wolpe for
answers. After all, he says, “how do they expect Australian’s to trust
them as a news source” if they’re too arrogant to answer simple
questions like those they ask of others?

Telstra on a leash? Not likely 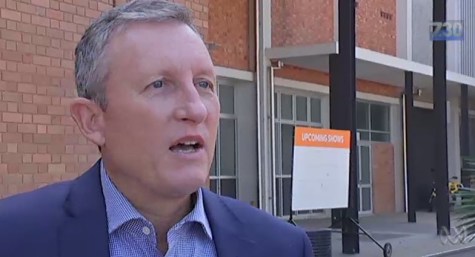 Gay Nationals candidate pilloried for his sexuality at preselection meeting