No sooner are celebrated Watergate breaking reporters Bob Woodward and Carl Bernstein paid $5 million to have all their notes and original documentation placed on public display by the University of Texas, than the one name missing from their historic repository is the name of the identity now on the lips of the US media – known only as ‘Deep Throat’. But it seems all of this could be about to change.

For the record the movie that turned oral sex into a seemingly improbable party trick was released in 1972, while the Watergate burglars threw a break in party to which the police invited themselves in June 1972 – that immediately set in train an investigation by two young Washington Post reporters as they set about uncovering the truth behind the bungled break-in. In helping to reveal the subsequent cover up that became America’s greatest political scandal that ended with Richard Nixon resignation and disgrace as president in August, 1974, they relied on a now legendary “snitch” who proved to be anything but a conventional whistleblower.

But without this mysterious highly placed source guiding them and offering often cryptic clues as they battled to keep not only on top of the story, but The Post abandoning the chase, Bob Woodward and Carl Bernstein’s reliance on Deep Throat’s advice to “follow the money” and not be sidetracked – Watergate and US political history could have been very different. For his troubles, Deep Throat not only played a pivotal role in helping ‘Woodstein’ crack open Watergate, which made them instant celebrities and millionaires, and winning a Pulitzer Prize, but inspired others around the world to follow his example, and future generations of reporters to see Watergate as a high water mark in journalism.

Basically Deep Throat’s ground rules as deep cover snitch, were that he would provide some leads and help confirm other information on “deep background” which could not find its way directly into print without developing other sources for collaboration. As revealed later, these meetings were held often in the early hours of the morning in a public car park by a pre-arranged signal, and Woodward needing to take elaborate steps to ensure he could not be followed. He was also famously warned by Deep Throat their reporting was placing their lives in danger.

So when another key Watergate figure, former disgraced Nixon White House counsel John Dean who has maintained an active Deep Throat watch for many years, last week claimed that Woodward has now informed The Washington Post his legendary source is ill – presumably to prepare for his possible death, once again Deep Throat is big news. Now some media are openly claiming Deep Throat to be gravely ill, even though he’s still America’s best kept secret – or at least as Oliver Stone would have it – probably second only to “who shot JFK”?

Once again the media is re-examining the central role of Deep Throat in helping ‘Woodstein’ and The Post take an heroic stand in the face of all kinds of threats emanating from the Nixon White House. An award winning exposure of an Oval Office that once bore more resemblance to the home for the criminally insane; than the work place of the word’s most powerful man! No wonder then the “who is Deep Throat” industry is now in a feeding frenzy of fresh speculation that the legendary source is possibly close to death, and therefore which of their usual suspects is not looking too flash these days?

Certainly as the subsequent ‘Woodstein’ best selling book, later made into one of the greatest political thrillers in move history – All the President’s Men – has shown us, it’s arguable that without Deep Throat’s steadying hand and grip on what was actually going on at the White House, Nixon might have survived Watergate. Remove Deep Throat’s insight and guiding hand in sorting through multiple and often obscure strands of criminality and investigative dead ends, which almost brought The Post to its knees – and American journalism’s greatest ever hour might never have happened.

In this context and ever since Deep Throat’s role became publicly known, millions of words and many people and whole schools of journalism have vainly tried to uncover the enigmatic sage.

So as the years rolled on and the scars left by Watergate receded, and his identity remained known by only four men – ‘Woodstein’, their boss former Washington Post executive editor Ben Bradlee, and the person who everyone assumes is a man, Deep Throat has never stepped forward to claim a nation’s gratitude. As things stand the three Post alumni are sworn to secrecy until Deep Throat gives the go-ahead or dies. With reports varying wildly as to the state of Deep Throat’s health, which can only be guessed at, Dean’s report that Woodward was sufficiently concerned to crank up The Post to get its obituary watch on standby, with Bradlee having admitted he’s already written Deep Throat’s obit, the US media is agog at the prospect that finally this perplexing puzzle is about to yield the final piece in this previously uncrackable jigsaw.

But whatever the final means of his public unmasking, it is sure to set off a whole new Watergate industry and once more put ‘Woodstein’ in the thick of the action. Maybe they have a book ready to go as they provide their own insider view as to the how’s and why’s of a man who if his motives were pure and wasn’t part of some wider agenda, long ago should have been afforded his due as a national hero – just as others long argue he was a traitor and deserved jail.

Regardless, the final chapter is going to be enormously fascinating as we get to better understand why his role is a secret he wanted to take with him to the grave – if not bothered beyond that? However, in the history of politics it is doubtful if there has been a greater instance of a man who it’s safe to say, curiosity most certainly won’t have killed this cat by his refusal to stick around just long enough to see the enormous fuss his unmasking will ultimately create.

And just who are the usual suspects?

Bill Straub writing for Scripps Howard News Service looks at five of the likeliest possibilities which includes remarkable as it may sound, the current Supreme Court Chief Justice. Here’s his chief suspects and the cases for and against:

The flavor of the month among the cognoscenti as a result of his recent battle with throat cancer – fitting Dean’s description of an ailing Deep Throat. He was a smoker, a member of the military, a Republican political operative and an assistant attorney general during the early years of the Nixon administration who, possibly, was aware of some of the more distasteful White House dealings.

But Rehnquist left the Justice Department before Watergate, joining the high court in January 1972. And he didn’t excuse himself when the high court was asked to determine whether Nixon had to release the tapes of Oval Office conversations. Still, an intriguing possibility.

One of the more anonymous candidates, there nonetheless exists plenty of circumstantial evidence pointing to Felt. He was the No. 2 man at the FBI until June 1973, well after the dam broke. He was privy to investigatory information, and H.R. Haldeman, Nixon’s chief of staff, was recorded telling the president in a 1972 Oval Office tape that most of the leaks were coming from Felt. Back in 1999, the Hartford Courant reported that Bernstein’s son, Jacob, was circulating word that Felt was the man. But Bernstein said he never told his son.

Serving as deputy White House counsel under John Dean, Fielding was known to smoke Marlboros and take a drink of scotch every now and again – fitting Woodward’s description. He also was certainly in on conversations regarding Watergate as a result of his position. A University of Illinois journalism class, collecting all available information and driving it through a computer, identified Fielding as Deep Throat. Haldeman, in his book about his White House experiences, also pointed at Fielding.

A Justice Department official during the early years of the administration, Gray was selected by Nixon to serve as acting FBI director in 1972 upon the death of J. Edgar Hoover. Watergate broke a little more than a month later. A documentary co-produced by CBS News and The Washington Post in 1992, “Watergate: The Secret Story,” identified Gray as the prime suspect, noting that he fits the description of Deep Throat provided by Woodward and Bernstein and was the only one of the possible suspects who could have met with Woodward on several of the pertinent dates. Gray and Woodward lived four blocks from one another during the course of events.

Perhaps for another perspective on the origins of Deep Throat, Tina Brown writing in The Washington Post last week attended a launch of a new TV documentary Inside Deep Throat – which has to be one of the more bizarre titles in TV history.

In her article Deep Throat: When Naughty Was Nice, Brown the one-time New York magazine publishing queen, reminds us of the origins that led to the inspired original moniker for the secretive Watergate car park snitch:

What both those ’70s melodramas, the political and the sexual, had in common was the brooding presence of Richard Nixon. Without his greenlighting of the Justice Department’s prosecution of Reems and the rest of the perpetrators of 1972s Deep Throat, the old skinflick would have long ago passed into oblivion. As it was, it became the most profitable movie ever made. Its $25,000 production cost yielded a more than $600 million payday – roughly a million bucks for each $40 invested. The money was collected nightly by Mafia bagmen, their suitcases bulging with huge quantities of disappearing cash. Deep Throat had winner’s luck for everyone but its creators.

You can read Tina Brown’s article here if you are a registered Post online reader. Also you can catch a flavour of the time 1973 review of Deep Throat (the movie) by well known critic Roger Ebert at his website reproduced here. 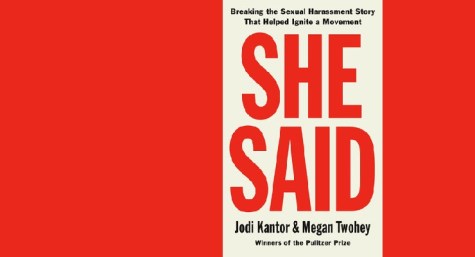 The importance of hearing what She Said