The gory detail behind the UMP disaster

We've been sent this cracker of an account of the collapse of the country's largest medical insurer, UMP. If you're wondering what it takes to cause such a calamitous failure, then read on and shudder in disbelief. Check out our reader feedback below the lead article.

We’ve been sent this cracker of an account of the collapse of the country’s largest medical insurer, UMP. If you’re wondering what it takes to cause such a calamitous failure, then read on and shudder in disbelief. Check out our reader feedback below the lead article.

There are enough dodgy deals, rorts and downright incompetence to keep a battalion of barristers going for another year or two. Some insiders have mentioned darkly that ASIC should have been looking at prosecutions a couple of years ago.

Naturally APRA have been conspicuous by their absence until the past twelve months.

It is hard to know where to start. Doctors have managed their own Professional Indemnity for more than a century. It has been an extension of the Old Boy network. When it was a cottage industry the natural clubbishness of the profession worked well. One didn’t need to be a financial genius, you simply believed that if a chap had a medical degree he must be worthy of protection.

The rise of litigation, ambulance chasing lawyers, and judges too generous with other peoples money saw the writing on the wall.

In Victoria it happened when the Cain Government closed down “the trough”, the personal injury (labor) lawyers had to find other fields. An indication of the rate of increase in medical litigation is that in 1979, when the recently settled $15 million Callandre Simpson case began, each NSW doctor in UMP was paying $75 for cover each year. Total subscription income for the UMP predecessor would have been about $300,000, (which is not a lot to fund $15 million).

The Medical Defence Organisations (MDOs) did not foresee any of the blowout, even though it had happened a decade earlier in the US. They only started offering differential subscriptions in the 80s. Until then we all paid the same and there was little incentive to avoid litigation. Risk Management was unheard-of.

The two large London-based MDOs supported the cottage industries in each state to varying degrees.

Both of these organisations brought some management expertise and much condescension to the antipodes. They gradually raised the ire of those locals who ran the competing MDOs. Attempts were made to compete on price, and force out the Poms. In both Victoria and NSW there was considerable profligacy as local chieftains beggared their organisations in the process of running the interlopers out.

In Queensland the British-backed MDO was losing money hand over fist. It was taken over by UMP in a deal that cost UMP members, but gave the banana benders the numbers on the UMP Board (which they still have).

The big lie in Medical Defence has always been discretion. The MDOs have always said that they are discretionary associations, not insurance companies. This means that they retain the right to refuse cover to members.

They have never done so, except in the notorious Chelmsford case in Sydney in the 80s.

As the main culprit was long dead and his estate wound up, there was no prospect of the doctor losing money. The UMP predecessor exercised its right to refuse to take responsibility, and left some victims in the lurch. The political flack was enormous, and led to the setting up of the Tito inquiry by the Federal Government, which recommended that the discretionary element of professional indemnity cover be removed. This never happened, but to all intents and purposes discretion was dead – except that UMP still used it as an excuse not to maintain adequate reserves for those claims which had not been reported (IBNRs).

This fiction – that IBNRs were not liabilities – allowed UMP to live on its subscription income, without putting anything aside for future claims. It was clearly the antecedent of the current crisis. The auditors, PricewaterhouseCoopers (who were also UMPs accountants) signed it off, even after their auditors told other Australian MDOs that they must bring the IBNRs to book.

Thus UMP was set up for the fall which followed.

In 1999 the other Australian raised extra funds from their members to help fund the IBNRs. UMP, which was the biggest, had been the most aggressively expansionist, and operated in the worst litigation environment in the country, proclaimed that they did not need a “call”, as they had discretion.

UMP replied that the concept was meaningless.

UMP finally made a call in December 2000. By this time they were a basket case. Members were incensed, feeling betrayed. Some refused to pay, higher paying members left. Subscription income fell by 10%. Interstate rivalries flared again.

The Victorian funds tried cherry-picking. One set up a shop-front operation in Brisbane (complete with its trademark dodgy corporate governance).

Another competitor helpfully asked the Accounting Standards Board (for the umpteenth time) whether UMP shouldn’t really be regarded as insolvent in view of the IBNR issue.

On top of this powder keg came:

* NSW Health Care Liability Act – this was a visionary effort by Craig Knowles at law reform, but unfortunately he didn’t quite recognise that its immediate effect would be to provoke an avalanche of new claims. UMP took 18 months of claims in the three months before the act was proclaimed.

* The Callandre-Simpson case, apart from costing $5,000,000 more than any other case, it also set new precedents which have had the effect of raising all other likely settlements in NSW by 30%.

* September 11 – which cleaned out some of UMPs reinsurers. Lloyds had already been hit very hard by UMP claims and were likely to require large hikes in the cost of reinsurance even before that event.

* A group of dissident members took legal action against UMP, claiming, probably correctly, that the call was illegal.

* The Accounting Standards Board announced that in their view all MDO should bring to account, immediately all IBNRs.

* APRA woke up. It decided that there was a disaster in the making and it should be seen to be doing something. It decided to bring it on by requiring the captive reinsurer be fully funded by 30th June.

This then is the background to the current crisis, and I haven’t once mentioned the former CEO, his $800,000 payout as the carcass folded or the Taree Flying Club where he had done it all before.

Even by Crikey standards, this is could be a ripping yarn.

CRIKEY: Our well-informed author has obviously set the scene for a cracking sequel, so it’s up to the Crikey army now to follow the leads and send in their insights.

We’ve had a couple of excellent contributions since publishing this article:

Up until the early 1980’s Doctors were indemnifying themselves against claims of medical negligence. Hence in 1985 average insurance was about$400.00.

However the legal meaning of negligence has changed over the last 5-10 years. Doctors have found that we are now virtually insuring our patients against an adverse outcome. Hence most of us are paying over $10,000.00+ pa premiums.

UMP operates in the 2nd most litigious state in the world – 2nd only to California. Most claims are settled out of court as it is cheaper for an insurance company to pay rather than fight the claim on its merits.

The operating environment of NSW and the huge numbers of these claims are as much to blame for UMP going belly up as was the occasional catastrophic court decision. There is a belief out there in legal circles that we doctors are making an issue out of virtually nothing. Some legal people have asserted that there is no real increase in number of claims; others that there is no real increase in the amounts paid (above inflation).

Statements by the Plaintiff lawyers association that we should be paying extra premiums, and accepting the courts decisions just miss the mark completely. Some very simple maths shows that 6% of the current Federal health budget is being spent on medical insurance. Health funding is tight.

We doctors would like to see less health dollars wasted on legal processes and more spent on hospitals. And contrary to what lawyers seem to think is the simple fact that doctors have already absorbed an enormous extra burden of costs in this area. We can’t absorb any more.

The current system of compensation by common law fails all measures of performance. It is extremely inefficient as a means of compensating the injured. It also makes compensation an uncertain and protracted affair, where there is a very small number of (Lotto!) “winners”. And most importantly it actually interferes with quality improvement programs across the health system, programs that are needed to reduce the number of patients injured.

Injured patients have a right to compensation. Common law is a means of exercising this right. Common law has failed and there is now an urgent need to change laws or systems.

Most doctors would prefer a comprehensive no fault scheme as operated under Victorian WorkCover before Bracks, coupled with a professional review body (Worksafe?). An alternative may be the New Zealand model.

If it takes the collapse/dissolution of a major player to force a legislative response then so be it!!!

CRIKEY: This is a pretty compelling articulation of the case from someone at the coalface. It will be interesting to see how many lawyers reading this would offer a different point of view.

What an interesting few years it has been with a series of business disasters all coming home to roost. I always wondered how the incompetent managers, CEO’s, NED’s and chairmen got away with it. The last few years of corporate collapses and near misses show that it was just that their luck was holding out, and now it ain’t.

Regarding the UMP disaster, your medical insider paints an ugly picture. I know Kerryn Phelps will disagree with me, but the variety of doctors unions (sorry, associations, guilds etc) also have played a big hand in this. These professionals’ unions have a sorry history of protecting their incompetent colleagues, to the cost of the general public, which goes back a long way.

Channel 9’s Sunday dug up story after story of incompetent doctors being protected, but they still saw no role for their associations in getting rid of the fools. This conspiracy of protection has penalised the doctors who are competent and ultimately been a significant factor in the demise of their insurance.

The doctors should be standing up and demanding that their associations filter out their incompetent colleagues. The knock-on positive effects to the doctors themselves and society generally will be huge, as well as making the insurance mess a lot easier to clean up. 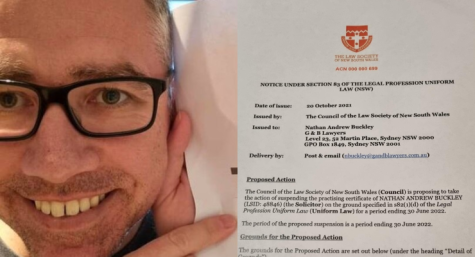 Anti-vax lawyer crowdfunds challenge to his suspension for crowdfunding

The ‘severe erosion’ of rights of mentally ill patients