The first, most general and most unhelpful thing to be said is that if there were no demand for the services of PR people there would be no market. If that market did not value the services of some spinmeisters more than the services of many journalists it would pay them less. If business firms, government agencies, charities, NGOs and the world in general did not see a need for employing such people, there would be no profession. But this remark deals only with the dynamics of market formation and not with the deeper question of why this “industry” exists at all.

The answer in a word is “information” which we all require to make sense of the world and the absence of which leaves us in a state of relative confusion and disempowerment.

Like humans and chimps, hacks and flacks share a common ancestor The Great Storyteller. Storytelling became formalised when people began to read and write symbols. The first known ‘newspaper’ was the free Acta Diurna (Daily Happenings), a hand-lettered gazette in ancient Rome, published from 59 BC to AD 222, mostly a record of political meetings. The second (published in China 1,300 years ago) was Tching-Pao (News Of The Capital). The government used it to distribute news of events and decisions. But it was Gutenburg’s invention of movable type in the 1450s that provided the big breakthrough, leading to Caxton’s invention of the printing press 25 years later. This made possible the mass printing and distribution of written information. The days of monks hand-copying holy works on to parchment were numbered. (They must have felt like some hacks do today as they contemplate their PR cousins.) By the way, the first periodical with a dated front page appeared in Europe in the 1620s and the first object we would recognise as a modern newspaper, the London Morning Post, began circulating in 1772.

The term public relations was coined in the United States in the 1830s, applying to action taken for the general good. The term did not enter more general use until revived in the late 19th century to describe the activities of press agents employed by the pioneering American industrialists, sometimes typified as robber barons, to protect their reputations from a newly intrusive and scandalising press. These tycoons used philanthropy to balance the ledger with God and public relations to balance the ledger with their fellow citizens.

In 1923 Edward Bernays (who died in 1995 at the age of 103) published Crystallizing Public Opinion, the first book to use the term ‘public relations’. Bernays dominated the intellectual development of PR for most of the 20th century becoming the “father of public relations”, a term he coined himself! Bernays, a nephew of Sigmund Freud, was probably the first person in PR to use psychological theory to try to achieve behavioural change in consumers, developing many of the ideas still used by people in business and politics as they seek to persuade.

Bernays asserted that PR was “advice for action based on social responsibility”, taking guidance both from the original ‘action for the general good’ construct and Thomas Jefferson’s principle that, in a democratic society, every activity must depend on and respond to the consent of the people. These are high values not today generally associated with the PR industry. So what went wrong?

As PR grew in commercial influence after World War 2, Bernays’ original concept broadened to include what he termed “action, which will serve both the organisation’s and the public interest” (my emphasis). Perhaps the elaboration seemed unexceptional at the time but ethical problems loomed. What if those two interests conflicted, as they so often do? PR professionals, as agents, would then need to make a choice between the interests of the organisation they represented and the public interest. This constitutes PR’s loyalty impasse which, rightly, concerns many people so much.

The commercial (and some would say ethical) imperative in such circumstances impels PR firms to act to resolve conflict in favour of their clients. This position has supporters like Milton Friedman who argue the ethical correctness of agents serving only the interests of their principals (Friedman used this argument principally to defend company managers doing what shareholders want them to do not what necessarily benefits society).

Bernays himself saw the threat. In 1982 he wrote, of ad agencies gobbling up PR firms: “To buy up a profession whose effectiveness must be based on independent judgements and advice to clients based on the coincidence of the public and private interest, regardless of other considerations – is not in the interests of the profession or the public.” But what Bernays dreaded has happened in the year 2001, 13 of the 15 largest PR groups globally are owned by communication conglomerates based on advertising agencies.

That’s an oversimplification of course because these days many PR people (like my company) work at a strategic level to figure out on behalf of clients how they can best communicate the great and complex issues that surround the modern organisation. These issues concern the organisation’s dealing with external stakeholders (consumers, community, media, government, investors, interest groups etc etc) and internal stakeholders (employees). Communicating effectively is not as easy as falling off a log (ask any journalist who has spent time in PR) and specific skills are needed to manage this process of ensuring information is properly (honestly, clearly, comprehensively) formed and efficiently delivered and that there are effective feedback channels.

Out of all this, I think, the reasons for behaving ethically emerge clearly. Dealing in information is a sacred trust. If we distort it, suppress it, hide its sources or invent it we are in a sense coercing people because we are denying them something they need and are entitled to in order to make proper decisions and judgements.

Despite Frank Flack’s cynicism, such questions weigh on some of us very heavily. And we know we are not perfect.

Which brings me to Frank Flack. But first to me. You know who I am. My name is on this piece. I am clearly responsible for it. You can hold me accountable. I have disclosed. I have tried to be transparent.

Not so Frank – who, in not revealing his identity, implicitly asks us to take him on trust. There were sufficient errors in his last piece to question whether this trust is justified. Whistleblowers have a greater responsibility to be accurate than those of us who reveal ourselves. We can be held to account if we are wrong. We can be interrogated, as Frank interrogated me. And that’s fair enough. But how can we interrogate Frank? How do we know who or what he represents?

It seems to me that Frank (or any anonymous source) is constantly in danger of being that which we all say we despise the anonymous, furtive, secretive operator whose interests are opaque and whose information sources are untraceable.

I don’t mean to be dismissive of Frank. It was I who told Stephen (Mayne) I thought his last piece was a most significant commentary on PR. As Cameron Logan has urged, this is a discussion we need to have. But I want to remind Frank of his responsibility and to caution the rest of us of what a thick and impenetrable cloak anonymity can be.

On that note, it being 5 o’clock in the morning, I will return my weary old flack’s body to bed. Keith Jackson

Spinning the Media: 80 years worth of research on spin in media

The Power Index: the world of spinners and advisers 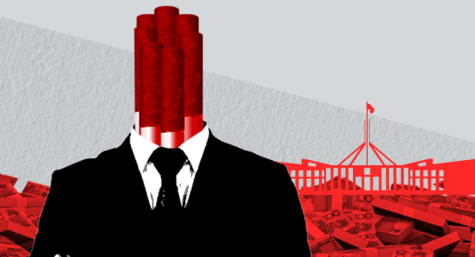